The veteran and artist wants to disrupt and re-route your apathy this Nocturne. 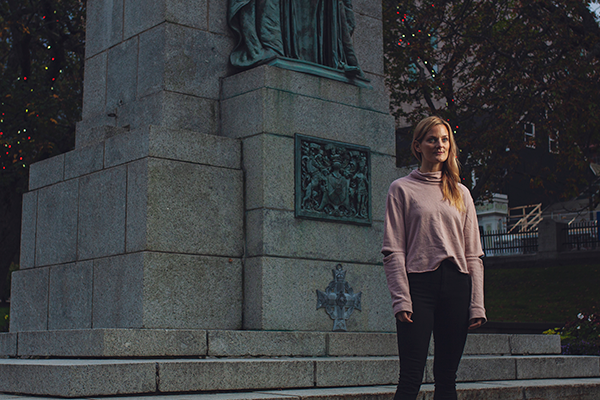 Jessica Lynn Wiebe has been keeping her calendar packed. She's currently writing a piece for Visual Arts News and has started a residency at Centre for Art Tapes where she's building a body of work from a past residency with a Canadian Forces Artist Program. She's also compiling documentation from a trip to the Ukraine for The War Museum.

These days, however, her focus is on Nocturne 2019.

On October 12 and 13, she facilitated a community project at Sweet Squish Farms in Sweets Corner, NS. There, she collaborated with The Veteran Farm Project, an effort that helps veterans transition out of the military by using the healing aspects of horticulture and working with the earth.

"I want to bring veterans and civilians together to build the work and have dialogue about war and conflict," she says.

Two veterans, Jessica Miller and Steve Murgatroyd, run the farm. Miller is especially focused on women veterans. Throughout the summer, about a dozen women veterans box food for vets and their families who experience food insecurity.

When Wiebe told Miller what she wanted to do for Nocturne, both women realized it was a perfect match.

"I feel very passionate about working with veterans and continue to work somewhat with the military although I have a sort of love/hate relationship with it," says Wiebe.

She joined the military a week out of high school, was trained as an artillery gunner in Manitoba, and was overseas in Afghanistan by the age of 20.

When she returned, she went to NSCAD and started creating art which helped her process her experience.

"The military has had a very large influence on my life. I never planned on making work about war and conflict, it just naturally happened," Wiebe continues.

She's interested in creating temporary structures around monuments and memory aesthetics that disrupt people's daily lives so they stop and think about how war and conflict affect our world.

"When the call for Nocturne came out this year and the theme was 'scaffold', I thought about the city structure and memorial spaces and thought of Grand Parade Square immediately."

A temporary memorial to ongoing war and conflict (which is also the project's title) will be built by the collaboration between Wiebe, The Veteran Project and civilians. The plan is to build a military checkpoint that will block off the main entrance to Grand Parade Square, in front of City Hall. "It'll force people to stop and be re-routed just like people who live in places of war and conflict are re-routed daily," Weibe adds.

The gate itself will be wrapped with a plastic-backed mirror, allowing people to see their own reflection within the city, pulling them into the installation. But, they won't be able to move through that space: "They will have to find a way around and when they do come around, they will be on the side of the soldier or police officer and look out, and see that is very easy to lose that perspective," Weibe explains.

She adds that there is a profound power dynamic that occurs between civilians and the military at checkpoints. Weibe hopes the project will ultimately disrupt the invisibility of ongoing war while inviting viewers to look inward. "I'm hoping people will just stop for a second the evening of Nocturne and take note of why they are being stopped and re-routed, because we don't have to deal with that here, ever."