Judging a book by its cover

The Alcuin Society Awards for Excellence in Book Design in Canada comes to Halifax. 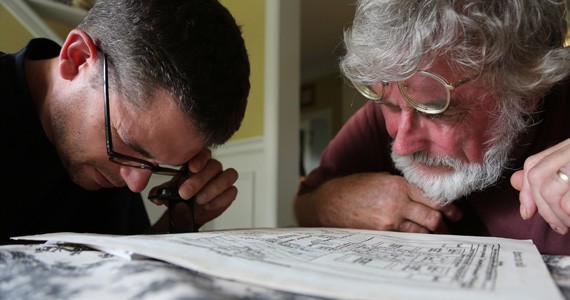 Sometimes there's nothing better than throwing caution to the wind and shucking society's tried and true proverbs: Bite the hand that feeds you, stuff all your eggs in a Hail Mary basket or, if you're the Alcuin Society, go ahead and judge those books by their covers.

The Alcuin Society is a non-profit organization dedicated to the love of all things written and has been living dangerously since 1996 when it first provided Canada with our only national Book Design Awards. This year, judges Susan Colberg, Seth Sullivan and Jessica Sullivan narrowed the field from 232 options to 37 winning titles, and Andrew Steeves of local literary publisher Gaspereau Press took home five of those prizes, two of them for first place.

"I've had books I almost didn't make win prizes," says Steeves, who's often surprised by the jury's picks. "Sometimes you know you really hit it out of the park, and sometimes you know you failed. Mostly it's in the middle. Often the books I tell people are one of the better ones I've done–it's the one other people walk around because it's the quiet one that sits there and does its job without boasting or making a show of itself."

Co-publisher and founder of Gaspereau Press, Steeves was working as a freelance journalist with a background in criminology and English Literature when he and friend Gary Dunfield started the publishing house in 1997 and fell into book design. "We sort of jumped in and started it from thin air," he says. "We're both hands-on people so while most publishing houses are white collar affairs that job out various production aspects of books, we weren't willing to give up the fun stuff to other people."

A decision that proved itself again this year as Steeves' quiet, elegant and timeless design style inspired by printing done in the early 20th century impressed the judges on a number of fronts. The Deer Yard's (first place, poetry) unusual salmon-coloured letterpress cover features a hand-printed image from an original wood engraving by Wesley Bates and a lot of white space to allow the text to breathe, while the first edition in an historical series Jeremiah Bancroft at Fort Beauséjour and Grand-Pré (first place, prose non-fiction) boasted quite a few academic design elements that had to both work together seamlessly and avoid the usual academic pitfalls. "The challenge was to present it in a way that keeps the reader in the game," says Steeves, who also took home third place in poetry for Ocean by Sue Goyette, which sports a classy wave motif and numbered poems instead of pages, and second and third place in prose fiction for Petitot by Susan Haley and Someone Somewhere by Dana Mills, respectively.

The entire winning catalogue from the Alcuins will be entered into an international book design competition in Leipzig, Germany and available for viewing (and personal judging, go wild) in a travelling exhibit that will pass throughout the country and stop in Halifax at the Anna Leonowens Gallery (July 1-12) before heading to Tokyo and Germany –reminding us 37 times that although we shouldn't always judge by appearances, that doesn't mean what we might love or find useful can't also be beautiful.

"We make a mistake when we abdicate our responsibility for beauty in the everyday and allow them to become the terrain of the specialist and artists, and stop expecting it on milk cartons, ash trays, in our cars or our toilets for that matter," says Steeves, offering up his own proverb. "If we stop expecting good design in basic everyday things...then we make a huge mistake."