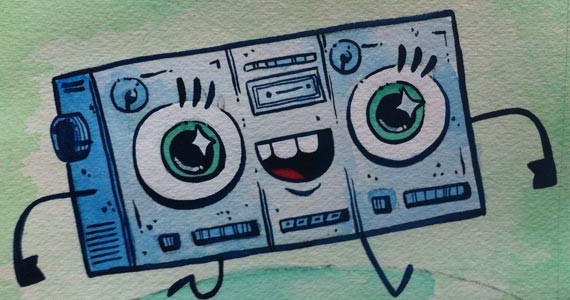 Tucked away in the lower gallery at Argyle Fine Art is the Pixar-laced stuff dreams are made of. Part friendly monsters and part brightly coloured glee, the creatures in Justin Lee's new exhibit will help you embrace your fears. Harold Hickenbottom and the Story of how he became friends with the Monsters under his Bed dominates a corner---a child's bed its focal point (with felted cat "Voodoo" by Angela Penton peeking out from underneath it). Harold, a character that's been eight years in the making, has light-hearted encounters with his new friends---brushing his teeth and munching on burgers in "Lunchtime," sandwich sharing with purple jellyfish in "Peanut Butter and Jellyfish," jiving with crazed dancing muffins in "Muffin Party" and gaping at a demented tentacled beast wearing his bed as a hat in "Surprise." It's all pretty adorable and good-feeling, playing with narrative, and could lend itself easily to a children's book with all the tales that surprise and delight us.

Justin Lee: Harold Hickenbottom and the Story of how he
became friends with the Monsters under his Bed
To April 13
Argyle Fine Art, 1559 Barrington Street, 425-9456