The Word IZ Bond spoken artists collective bring out Montreal's Kalmunity Vibe Collective and talk about the city's need to break black history out of February. 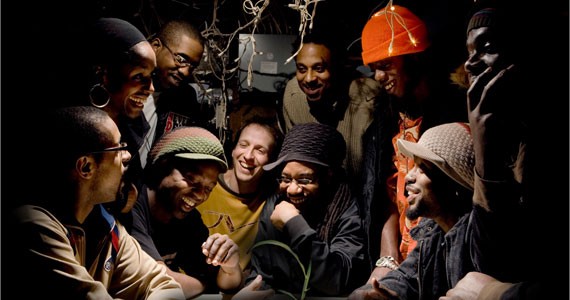 Kalmunity Vibe Collective will blow you away.

The Word IZ Bond spoken artists collective (you may know them from hosting the spoken word series Speak! at The Company House on the third Thursday of every month) and Montreal's Kalmunity Vibe Collective go way back, but it's been about a decade since they've performed in Halifax. "We have wanted to have them back but obviously with 11 members it's a big undertaking," says WIB member and spoken word artist, El Jones. "To put it simply," adds fellow member Reed "iZrEAL" Jones, "we do one show a month, about nine of them have featured guests from away. We cover flight payments and per diems and they usually stay with one of us, so we can squeeze in one more feature. That adds up. For one show with Kalmunity there are those same costs multiplied by 11...This show cost more than our whole year. It's impossible for us to bring Kalmunity without huge support and support like that usually only comes during Black History Month."

Described as a "live organic improv experience," Kalmunity Vibe Collective is bringing something truly unique to The Company House. "If you go to the show it is just an immense creative wave," describes El. "The band comes out and Jahsun the drummer might start laying down the beat and then the instrumentalists will come in and they will build a rhythm and sound and then when the vocalists are feeling the vibe a poet might jump on the mic and start spitting a verse, and then a rapper feels it so he or she comes up and joins in, and then the music makes its way to a singer, and everything flows into each other and out again." There's so much going on and the lineup changes from show to show, so it's hard to know exactly what to expect but Reed tries to sum it up: "People can expect music, hip-hop, R&B, jazz, pop music, hits, all of that, and singing and poetry and rapping, maybe in multiple languages blended together perfectly. The only reason you know it's improv is because you can see the poets, singers and rappers negotiating who is going to jump on what beat. Once they know, look out—they jump on and off the mic like double dutch."

"It's like no other poetry or music show you will see," adds El. "It is about feeling creative energy and feeding off the other artists and the audience to take everyone to the next level. In a world where so much now is corporatized and crowd-sourced and auto-tuned—returning to the idea of making music in an organic way is revolutionary."

It's not only revolutionary but innately socio-political in a city that only designates a month to Black History instead of actively promoting it all year. "I think every black person will tell you that February can't be the only month when black people become visible," says El. "If we're using this month as impetus to create long-term programs whether that be artistic, or employment programs, or education then it serves as a good foundation, but too often we are only recognized during this one month and then forgotten about the rest of the year. We need to be more than tokens."

It's an important issue to acknowledge. Even if it means looking in the mirror. "The fact is," says El, using The Coast as an example, "we will be covered for like maybe the second time ever in our 12 years of existing because we have this big Black History Month show, yet we are performing every month in this city and have won national championships and travelled all over Canada and bring in top artists, and have a Canada Council grant, and so forth, and yet we generally get less coverage than the white indie band that played for the second time at Gus' Pub." Racial biases seem to be alive and well in Halifax, seeding frustration that can't be contained by an official month or a bone or two—just take a look at Idle No More, a national movement sown from marginalization and the need to be heard. Even when funding appears, like WIB's TD Then and Now Black History Month show, it's with invisible strings. "One story we shared with some of the bank personnel at the launch of the series was how when we got the cheque from TD and went to the bank to put it in the WIB account, the teller looked at iZrEAL and said 'How did you get this?' And then we had to wait a week for the cheque to clear even though this is an account we have had for almost a decade," reflects El. "So that story makes the point about the racism that still exists in this city and why it's important for institutions to recognize the systematic barriers we still encounter and take responsibility for creating solutions and opportunities."

It's an uphill battle and reserving the right to talk about that struggle is vital. "One thing that is good [in working with the TD Then and Now Black History Month Series] is that we haven't been given any limitations," says El. "Nobody has asked us about what we are saying at the show or told us we can't talk politics, and we wouldn't take the money if it meant compromising the space that we provide to speak freely."

Along with bringing out KVC, in conjunction with TD Then and Now, WIB is organizing a youth workshop on Saturday from 1pm to 4pm at Centerline Studios (2439 Gottingen Street) and another show at the NSCC in Truro (36 Arthur Street, Friday, Feb 22, 7:30pm) for out of towners. "We always do youth workshops," says Reed. "I think that's just second nature. In the black community, you better give back to the community in the youth. That's just how it goes. When you stop giving back, the community stops supporting you. It's a two-way street."

"The workshops are open to all youth and we encourage everyone to come," adds El. "One thing that particularly motivated us was knowing that so often our youth grow up not knowing that jazz is a black art form, for example, or understanding where hip-hop comes from, or what the history behind it is. They participate so fully and creatively in a hip-hop culture without understanding its African roots and what the culture and music mean politically.

And of course every time there is a successful black expression, there is an effort to appropriate it so our youth really don't understand where they come from, or why what they listen to sounds the way it does, and why it doesn't sound like it sounded when Public Enemy were doing it and so forth. So the opportunity for them to work and vibe with these top musicians who are making a living off their creativity, but also to see how intelligently and thoroughly the approach their art, is so important for them in understanding what it means to make music and to live an artistic life that is accountable to the whole struggle of a culture to survive and flower."

Politics aside, once you get right down to it, Kalmunity Vibe Collective just put on an insane, un-missable show. "Aside from being my favourite show in Canada, they're good people and they deserve a global audience," says Reed. "Scotia is about to be blown away."