In Notes for the Everlost, the author doesn’t confront death: She figures out how to live with its unslayable presence. 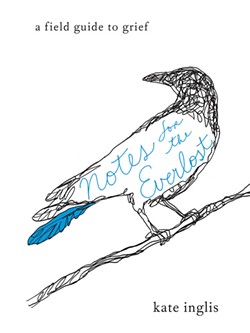 It's counter-cultural, this talking about loss. She notes it in her book: The ones who stare at their shoes and say nothing, the ones who murmur about god's plan and a better place. But for Inglis, the need to talk about it—or write about it, which is a kind of talking about it—presented itself immediately. Her twin boys, Liam and Ben, were born at just 27 weeks gestation, in May 2007. Liam was gravely injured. The boys were three months early, and impossibly tiny.

Inglis, a photographer and writer, began Notes for the Everlost before she knew she was writing it. She started in the middle of the night, the day after her boys were born. Still attached to an IV she almost toppled, because she woke with such a start, she fumbled for paper and pen and began.

"There was an instinct there to make and somehow direct the shape of what was happening. I thought, I am just going to be overtaken by horror unless I can see beauty and hope in what's happening," she says. "Even if it was loopy, messy, chaotic, writing was an investment in a future joyful existence. No matter how things would go, I knew I would have to figure out how to see life as beautiful and them as beautiful, and not just drown in trauma."

That instinct—and the work to see beauty and hope—remained a constant through the next weeks, as Liam underwent heart surgery and brain surgery while Ben thrived, through Liam's death at six weeks, and into the yawning chasm of months and years afterward, as Inglis raised her toddler, Evan, and newborn Ben, while grieving Liam's loss and figuring out how to live in the strange new country of bereavement.

Inglis founded Glow in the Woods in 2008, an online community for "babylost fathers and mothers." At the time, she says, there really wasn't anything online that wasn't religious—and none of that resonated with her. She wanted a place to do the deep work of grieving and going on. "When it dawns on you that there are other people, and you can figure out how to find them, it's your first full deep breath," she says. "That is how it feels to share space with someone who has lost an infant, held a dead baby in their arms."

Inglis acknowledges most people recoil from the phrase "dead baby," but that, she'd argue, is why Glow in the Woods, Notes for the Everlost and her upcoming salon are so vital.

"People say there's no wrong way to do grief. And I have a 'Yeah, but...'" she says. "You gotta do it, you can't fight or flight from it. That dragon is living inside you now, blowing fire. It's useless to pretend that dragon isn't there. You have to figure out how to live with your grief, talk to it, feed it and water it. Keep the stall clean so it can take care of itself, very much like a farmer tends to a cow. It's a big job and a lot of it is shovelling shit."

The job is made easier, she knows, by sharing the shovelling. "Helping soothe someone who is only a year into it is not just a way of helping that other person, it soothes my beast as well. It's animal husbandry not only for your dragon, but mine too."