After years as a painter, the Dartmouth native is bringing *Kettle Harbour*, her first graphic novel, to life. 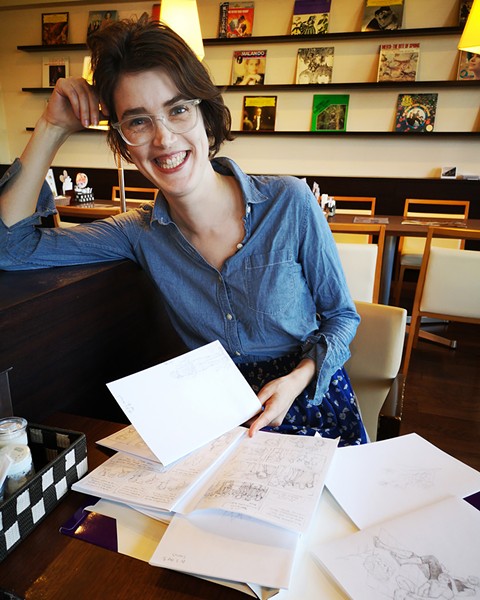 "I have to tell this story."

That enough for Katharine Vingoe-Cram to start writing and illustrating her first book—an in-progress graphic novel called Kettle Habour. The Dartmouth native, who holds a BFA from NSCAD and a Masters in art history from Queen's, spent most of her creative career painting, but a long-time interest in comics—and a life-long desire to make one her own—crept back into the forefront of her mind recently.

"I always wanted to do narrative painting, and it's not necessarily cool. I was always hinting at things in my paintings and struggling to be being explicit enough," says Vingoe-Cram. "Last year I wrote some prose and my husband was like, 'Why you don't you just illustrate this?' And then last summer I started to draw."

With inspiration from Japanese manga (her childhood obsession and a cast of characters she couldn't stop sketching, this fall she was accepted into Visual Arts Nova Scotia's 10-month mentorship program and paired with poet and NSCAD prof Karin Cope for the journey. With the help of Cope, Vingoe-Cram has been carefully weaving the story of Kettle Harbour, following three characters over an explosive week leading up to the opening of a play. Now she's 14 chapters into her first draft—"flaws and all"—tackling issues of family, relationships, grief and queerness.

Vingoe-Cram says while diving into a new medium made her nervous at first, it's what she was meant to do.

"Painting doesn't bring that kind of passion, for me anyway. It's a bit more meditative. It's calmer. There's not as much of that heavy intensity, in the sense that the people are living in your head," she says.