Coming from a long line of crafty women, the NSCAD student threads her way to calm. 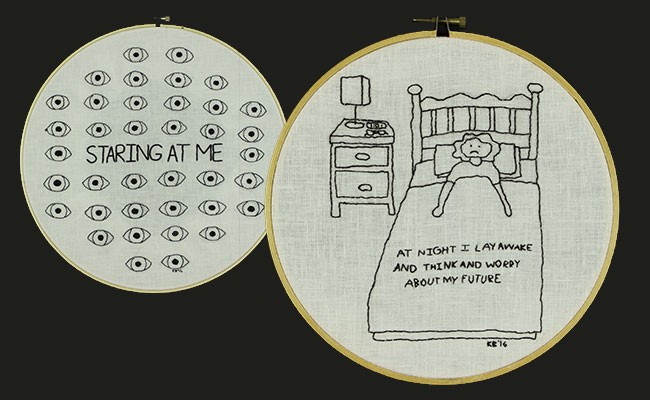 Kelsey Borden’s interest in embroidery didn’t click in one moment. It unfolded slowly: “I come from some very crafty women. My grandmother was Depression-era, so she sewed all her kids’ clothes, and my mother grew up with the craft of the ’80s, so it was almost osmosis,” Borden says

A NSCAD class where the fashion and textiles major had to stitch a map of her route to school saw her picking up the needle, but it was a book that made things really take hold: “I found this one book at the public library, called Hoopla, The Art of Unexpected Embroidery, and it was a completely unexpected book. It was not your average stuff you’d do for embroidery, if you think of, like, vintage ducks and hats. It made me think of ways to take embroidery from craft to this more art aspect.”

The result? A collection of Borden’s own embroidery, clean-lined in stark black and white, opening at Anna Leonowens on February 27. Titled Thoughts and Confessions, the pieces are sort of a visual diary entry, Borden says: “There’s been these studies about handcrafts and how they’re good for stress. And so, by putting down all these thoughts, it’s a way to like, calm them and let them out.”

And while the frankness of each piece makes it obvious how clearly lifted from Borden’s life they are, they’ll strike a note in anyone who’s ever stared at the ceiling at night, wondering where they belong: See her a rendering of a mirror that reads “How others see me,” or a simple bedroom scene with “At night I lay awake and worry about my future” stitched over the bed.