Smith’s jones: With the exception of a few odd documentaries, including the film about Prince, episodes of Degrassi, comic books and other ephemera, here’s a guide to Kevin Smith’s visual storytelling to date.

by Carsten Knox and Matthew Ritchie 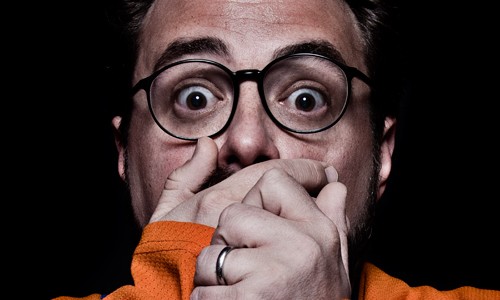 After his next release, the hockey epic Hit Somebody, Kevin Smith says he's done being a film director. No more snootchie bootchies. If the popularity of his podcasts and spoken word engagements continues---this week he's back in Halifax for the third time in four months---he won't need to make movies anymore. If you're wondering why Smith is such a big deal, check out his cinematic contribution.

Smith arrived on the crest of the American indie film movement of the 1990s, the same year as Tarantino's Pulp Fiction and the year after Richard Linklater's Dazed and Confused. Clerks established the themes that run through all of his personal films: Sex, friendships and relationships, leisure and pop culture---especially Star Wars---all thrown around by very talky, very funny characters with spectacularly vulgar vocabularies. Looking back at the black-and-white micro-budget film (famously, he paid for it on credit for less than $30,000), it's still pretty funny, much of it thanks to Jason Mewes as the garrulous Jay.

A bomb when it first came out, Smith's second feature, a rambling teen comedy inspired by John Hughes' 1980s movies, has developed something of a cult following, even beyond those who consider themselves fans of Smith's View Askew cinematic world. Notable for a solid ensemble cast, including Jason Lee and Ben Affleck, and for hidden sailboats and cats stuck in your cousin's ass.

In a lot of ways, Chasing Amy is Smith's most ambitious film. It's about the relationship between two cartoonists, Banky (Lee) and Holden (Affleck), and between Holden and Alyssa (Joey Lauren Adams), who falls in love with Holden though she identifies as a lesbian. While still being a foul-mouthed comedy in Smith's typical style, the film is also a sweet romance, exploring presumptions about sexual identity. There's a bit too much yelling, mind you.

This is the closest Smith's liable to get to a superhero movie, a comic fantasy with fallen angels the key antagonists (Affleck, with buddy Matt Damon). Though some members of the Catholic church didn't appreciate the film's skewering of its dogma, it's too affectionate to be a real satire, held up by a stellar cast including Linda Fiorentino, Salma Hayek, Chris Rock, George Carlin and, as the cutest deity ever, Alanis Morissette.

As a thank-you of sorts to his audience, Smith directed this comedy making his perennial chorus, Jay and Silent Bob, the centre of the movie. Its story feels thrown together, but for fans of Smith's work and cultural preoccupations there's plenty to enjoy.

Smith's first shot at the mainstream, the film aims to be a heartwarming story of the relationship between a father and a daughter, with a little romcom thrown in for good measure, but feels generic.

Smith revists characters from his debut who, it turns out, haven't done much but go from the convenience store to jobs serving fast food. The good news is Clerks II might be his funniest movie to date, upping both the laugh-per-minute ratio and the gross-out gags, for those who like that sort of thing.

Despite a talented cast---Seth Rogen and Elizabeth Banks are BFFs who decide to solve their cash woes by making porn---and some big laughs, this feels like a bit of a missed opportunity. Instead of pushing buttons the way Chasing Amy did, Smith plays it too sweet and, at the end, a little too safe.

His only work-for-hire film---he didn't write this one, just directed---you can tell Smith has a lot of affection for the '80s buddy-cop genre in the way Cop Out throws around action and comedy. Not as bad as you might have heard, and Tracy Morgan is a highlight.

It's slightly ironic that for a film by a self-professed stoner who has been directing stoner comedies for almost two decades, Smith's Red State may be the least pot-friendly movie ever made. Based on the exploits of the radically conservative Phelps family, it's the story of three boys who solicit sex online and are kidnapped by a right-wing cult, followed by a Waco-style disaster with the ATF. Smith recruits a strong cast for the self-distributed flick, with John Goodman and Michael Parks playing lead roles, but high-calibre actors can't save the film from an overwritten plot and overwrought dialogue. A confusing entry into Smith's filmography that may alienate some fans, but that might be the point.