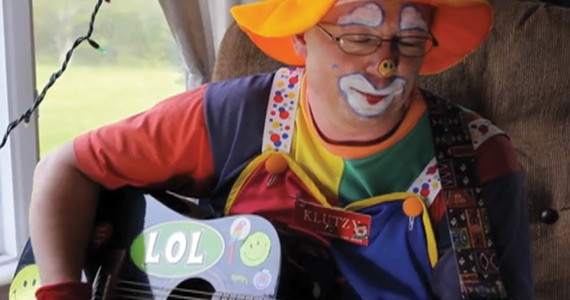 When an inebriated bar patron first told him about a Cape Breton clown who'd won the lottery, the story brought a clear image into Michael Fraiman's mind.

"I pictured that he lived in this mansion and wore a tuxedo with clown makeup," Fraiman says, recalling the day Dale Rancourt---AKA Klutzy the Klown---first entered his imagination. As a final-year student of journalism at King's College, Fraiman felt a documentary about Rancourt would make for a fine school project, and his friend and fellow j-schooler Adrian Lee agreed. The duo was fascinated enough that, even after the idea failed to meet academic criteria, they pursued it on their own, travelling to Sydney in June for three days of living and shooting with their wealthy, wacky middle-aged subject.

The product of that weekend, a half-hour documentary entitled Big Shoes, will be revealed Friday, August 12, at the Bus Stop Theatre (8pm, followed by a Q&A). Viewers will see in Rancourt a man whose face paint isn't hiding anything. There's little distinction between clown and man.

"It's about a guy who grew up in a small town having small-town dreams and having some crazy things happen to him that changed those dreams, but at the same time he's really happy with what he's got," says Lee.

Happiness obviously comes a little easier when a lucky lottery ticket allows Rancourt to live out clowning dreams and purchase toys such as a fully operational Ghostbusters-themed car. Yet when he's out of Klutzy character, he lives a fairly solitary life.

So, didn't Fraiman and Lee find any melancholy behind the mirth? "He's pretty isolated from everyone else, so you'd assume that. But he seems genuinely happy," says Fraiman. "It's almost freakish. The hardest part for us in filming this was portraying that this man is not putting up an act, that he actually is like this all the time."

Rancourt had so much energy, in fact, that his much younger chroniclers nearly ran themselves ragged trying to keep up with Klutzy's performance schedule. The film offers several snippets of Rancourt's act, as well as introspective out-of-character interviews. Rancourt never once runs out of words or an inclination to use them, confiding in the camera like an old friend---which is particularly noteworthy given that Fraiman and Lee didn't even meet their subject until filming began.

As eager as Rancourt was to participate, he was equally pleased with the results. "He said something along the lines of, 'It portrayed me as the man I want to be,'" says Fraiman.

As recent King's College grads, what Fraiman and Lee want to be is working journalists. Specifically, they'd like to keep collaborating on documentaries, a plan that would gain considerable momentum if Big Shoes is, as the pair hope, accepted into the Atlantic Film Festival.

While they await word from the AFF, Fraiman and Lee are busying themselves with another project, a five-minute documentary that will capture Lee's attempt to learn how to ride a bicycle. Having found a good professional relationship, they want to take advantage of it.

"It's hard to find someone you can work together with in journalism, especially in TV documentary," says Lee. "But I feel like with him it worked out really well."

Fraiman and Lee are pleased with what they've been able to accomplish thus far. But chances are no one's happier for them than Klutzy.