A bunch of digital EPs have prepared your mind and body for Kuato’s debut full length, The Great Upheaval 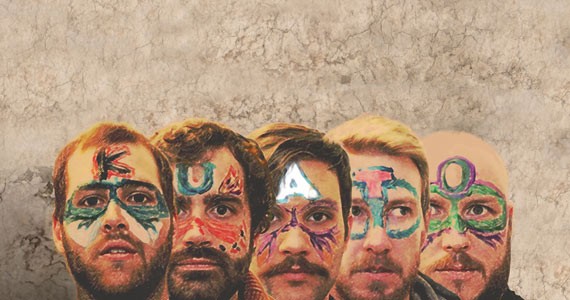 On Friday at The Seahorse, Kuato will play a live release show with New Brunswick's Zaum and Jon McKiel. The often-rotating lineup has put out three brooding, heavy EPs before this grant-supported full-length, recorded at The Old Confidence Lodge in Riverport last spring.

Released in June, The Great Upheaval is a carefully constructed concept album drawing from the culture and heritage of the Acadian members of the band. Both from Yarmouth, Pothier and guitarist Mike D'Eon approached the communal songwriting process with intense themes.

"We wanted to present Acadian culture in a way that hadn't been done before," Pothier explains. "I mean, I grew up with that stuff and it's always fiddles pounding and very traditional paintings, stories, narrative poems and strictly folkloric kinds of art. But for me it was like, how can I feel like I'm contributing to my culture but at the same time fulfill my creative goals?"

The merger came from a dark history. The Acadian Expulsion of 1755, or Le Grand Dérangement, is considered one of the first acts of genocide in the west. After settling the coastal regions of Nova Scotia, the French were forced from their lands by the English to repopulate the province with Protestants. There was murder and destruction. Under duress, many settled in the US south ("Cajun" evolved from "Acadian") while others went inland until the act was repealed.

"When anything like that happens in a place, it permeates the air and the soil and the art," says Pothier. "When I go to Grand-Pré, I feel a weirdness. You step on that ground knowing 300 people were slaughtered there and you can feel it and that comes out in the music, if you let it."

This historical energy creates the tone and movement of The Great Upheaval, which benefits from attention to musical narrative instead of lyricism, and emphasizes visual elements.

"We used the history as a guidepost, like we wanted a song that represented prosperity at first, like the opener 'New Home,' we used major tones," says Pothier. "And we wanted super-aggressive sounds for 'The Ballad of Bloody Creek,' so that kicks right into the heavy parts."

The artwork by bassist Stephen MacDonald also uses this palette: "We wanted something aggressive and violent but not graphic, so you can get the theme without knowing the history."

Kuato says that the advantage of instrumental music is its universality. D'Eon says it's a lot like classical music, and the band participates in Acadian culture without language barriers.

"Still, we were conscious that we didn't get cheesy," says Pothier. "Actually, D'Eon is our cheese filter. It's the difference between Dark Side of the Moon and King Arthur, that weird keyboard record by Rick Wakeman—it's not a big line to cross so we were very conscious."

D'Eon continues: "A lot of instrumental bands spend a lot of time wanking on solos, because with instrumental music you have all this space, so we're careful playing live, too."

Pothier says that seeing Kuato play live can change the listener's perception of the music itself. "You probably don't notice when you listen to the record, but say there's a bar and a full melody. That melody is constructed by three guitar players playing off each other," he says. "No one would really know until they see it. We work from cues and ideas and we hope it's an album that you can just put on and listen to, and then really get into when we're playing it live."