As the rapper and beatmaker celebrates a new mixtape, he guides us through the tracks he grew up on. 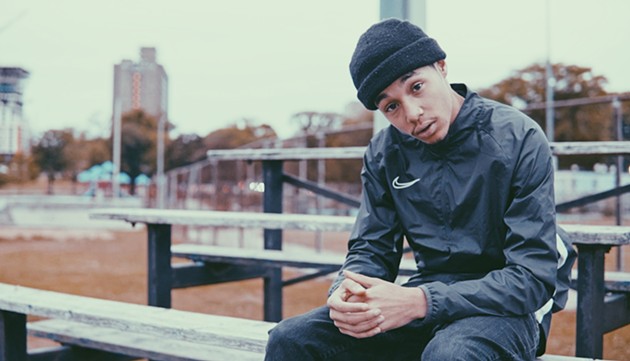 If 2020 belongs to anyone, a strong claim could be made on behalf of Halifax's own Kye Clayton: He's already dropped two EPs and several singles this year, all while growing the record label he co-founded, Let Dreams Be Noticed and becoming the valedictorian of his high school class. Furthering his case? The fact he's dropped one of the most lightning-in-a-bottle songs of 2020 yet, "Black Is Power."

When we profiled the rapper and beatmaker earlier this year, we said "if Kye Clayton’s career-to-date had a tagline, a good contender might be 'never get in the way of your own magic.'" We're happy to report he hasn't, as evident on his new mixtape, Temporary, that lands tomorrow, July 26.

Every bit as sky-burning and electrically charged as fans have come to expect, the new, 10-track effort is, according to Clayton, "based off temporary things"—from decisions to habits: "My friend told me ‘Everything in life is temporary’ and I was like ‘That’s facts,’ because eventually, you’re gonna pass away, no matter what happens," Clayton says over the phone. "This mixtape shows, are you gonna live your life through someone else’s ways—or yours?" he added in an email.

In honour of the mixtape's release this Sunday, we asked Clayton to build a playlist that acts as a map of his influences, showing where his lyric-forward flow and era-traversing beats come from. "A lot of the artists that are on here, I listened to since I was a kid—so like, Grade 4," Clayton adds. Get ready to throw this list on repeat:

"Chains" and "Let Go" by Aaron May
“I came across [Aaron May] while going through Instagram, looking through ads, and I saw his song 'Let Go' and I liked the beat a lot,” Clayton says. “Certain songs that made it on my His2tory mixtape were based off the way he did his singing stuff. He also makes all his own beats and raps and I do the same thing. It shows that like, if they’re at this high level and people are noticing, and they’re doing most of this stuff themselves—or all of it—why can’t I do most or all of it myself?”

"Acid Rain" and "Paranoia" by Chance The Rapper
"I was in Grade 6, and I remember I was playing on the playground in elementary and I can just vividly remember, I can see myself, rapping those songs 'Acid Rain' and 'Paranoia' every day at the playground," Clayton recalls of these two CTR classics.

"U Wit Me?" and "Views" by Drake
"Those songs are him just goin' in and rapping for real. He challenges in a rap: It’s less him singing and him spitting facts, and that’s what I like with Drake," Clayton says.

"Thought It Was A Drought" and "The Percocet & Stripper Joint" by Future
"Most people go through droughts in their life, and Future was homeless at one point—at like 25, 26, before he even got famous. So: listening to how Future came up and what he went through, and everyone thought it was a drought," says Clayton, explaining his affinity for the Atlanta rapper. "He just came out of nowhere with this crazy album, Dirty Sprite Two, that just showed the world in 2015."

"Outro", "Black", "Crown", "Ridin Wit It", "By Any Means" and "Focused" by G Herbo
Clayton says the track "Survive" from his new mixtape takes its tone from G Herbo, borrowing the way the Chicago rhyme-slinger flows against the grain of a beat to give his voice more impact. "And the reason I like G Herbo is 'cause he’s so real—and I live in the hood and hearing what he says, he’s like a street poet for me. I like to listen to Herbo to hear what he’s gotta say," Clayton adds.

"Once an Addict",  "Love Yourz " and "Neighbors" by J. Cole
"I like how J. Cole just talks about his life—so it’s a lot of life lessons, but he also goes in about stuff that about things that maybe aren’t even relevant to his life and just create a story with it,” says Clayton.

"Killuminati",  "Survival Tactics", "Christ Conscious" and "LAND OF THE FREE " by Joey Bada$$
"I like how Joey, he raps just like, different: He's an old school head and raps on more boom bap beats but he still goes in," Clayton—who's been known to favour boom bap beats himself—explains.

"Sing About Me, I’m Dying of Thirst",  "Poe Mans Dream", "FEAR" and "GOD" by  Kendrick Lamar
While all of Lamar's catalogue has left a sonic stamp on the next generation of rappers, Clayton says "FEAR", in particular, made its mark on him: "That song, listening to it front to back relates to everything in my whole life," Clayton says. "Because he talks about being a kid and all the things that happened, being a Black kid and growing up in the hood and it literally just sat with me: All that stuff happened to me."

In short, if you drew an arrow from "FEAR" to Clayton's own life-narrating "District 8", you'd be penning a straight line.

"The World Is Yours " and "Life’s a Bitch" by Nas
"The reason why these songs are so influential to me is because Nas influenced most of these people, like J. Cole and Kendrick, who they are today," Clayton says. "So it was like a ‘I’m influenced by these people and this is the main person that influenced these artists that I listen to the most’."

"The ends", "Sweet sweet", "ASTROTHUNDER" "STOP TRYING TO BE GOD", "Oh My Dis Side" "Impossible", "I Can Tell" and "Apple Pie" by Travis Scott
And if it wasn't for Scott, maybe Clayton would've taken another path altogether: "Travis Scott was the first person I ever listened to that got me into music. In Grade 9, I listened to everything Travis had for six months straight, no one else, just Travis and trying to digest how he made beats, because he does a lot of his production—because he’s not a lyrical god but he makes his songs sound so good you just wanna listen to them," he says. "I truly listen to Travis Scott ‘cause the sounds he does, and how he goes on it, the cadences. "