Celebrate one year of great events, and the best beer, this Friday 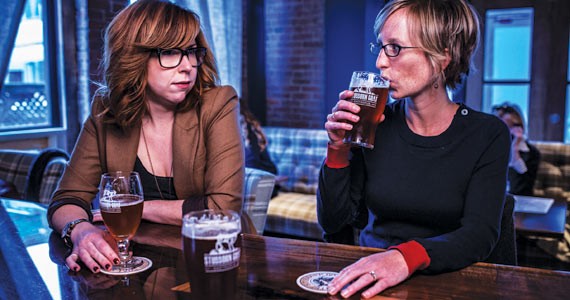 Last June, Tracy Phillippi, a marketing coordinator at Garrison Brewing Company, decided to approach a few female craft beer lovers/makers with an idea: to promote women’s involvement and interest in craft brewing. That was the beginning of the Ladies Beer League, and one of its founding members was Pam Crouse, now chairman of the board for the LBL. “Together, we planned our first event,” says Crouse. “It was an informal beer tasting, to brainstorm with attendees about what they'd like to see as far as future events.”

Crouse and Phillipi thought that interest would be small to begin with, expecting perhaps 30 guests at their first event. “We had an idea that we'd be holding meetings in living rooms,” says Crouse. “One hundred and one women showed up! At that point we knew we were onto something.” On to something indeed. Since that initial event, the LBL has been growing and diversifying its event calendar, with cask ale tastings, film screenings and various tours. “It's been overwhelming,” says Crouse. “There’s a growing interest in craft beer, and we aim to provide a friendly atmosphere for people to broaden their knowledge, and meet people with similar interests.”

One year later, the Ladies Beer League is going strong and is celebrating their first anniversary on June 20th at the Wooden Monkey, Dartmouth (305-40 Alderney Drive). “We are tapping three special casks from Garrison, North Brewing, and Big Spruce,” says Crouse. “There’s no cover, just drop in and pay as you go.”

As for what’s next for the ladies of the beer league, things are already in development, and Crouse suggests you check out their website. “We have some home brewing classes planned,” she says. “As for the next big thing, our board of directors have a few things on the go. You'll have to come to the party to find out!”