The director—and Being Black In Halifax film program alumni—shares her "honest and resilient" storytelling. 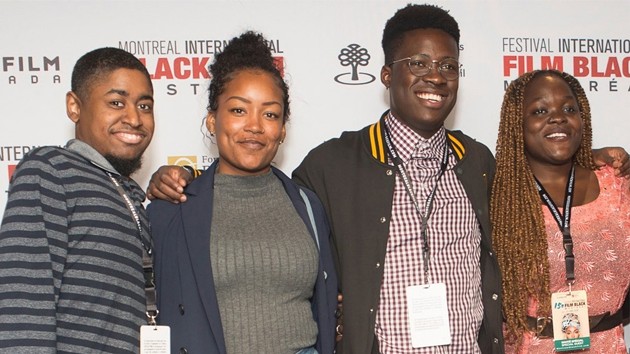 How do we heal from a wound? If it's an injury to our bodies, we can go to the doctor’s. We can take time off. We can rest.

For our minds, we can practice healthy coping mechanisms—like meditation, consulting a therapist or building a support system of friends and family.


But how do we heal from a wound that spans generations and has left behind a legacy of pain and struggle?

This is the question Latesha Auger explores in her 11-minute documentary film, Journey Of Self Love. “I was going through my own personal battle and I had no idea what generational trauma was at the time. I just kind of thought the world was against me,” says the filmmaker, who is part of the latest class of emerging storytellers in the Being Black In Halifax film program.


Auger—along with local, emerging filmmakers Bradley Bright, Francesca Ekwuyasi and Harmony Olouwaseun Adesola—was selected to take part in the initiative, created by the Fabienne Colas Foundation. The program announced on July 22 a significant expansion (backed in part by Netflix) that promises to extend the hands-on filmmaking experience to another 20 Black creators in Halifax, Montreal and Toronto through 2021. It's a much-needed push back against the blatant lack of diversity—and lack of Black voices—in Canada's film industry.

It's also been part of Auger's own healing journey, as she's used her time in the program to help share her story, which first rendered itself as a book in 2015.

Auger went through the foster care system as a young child and remembers how angry and confused she was: “I went through this chapter where I kind of felt like I was alone in just dealing with the consequences of my mom's decisions, but later when I grew up and became an adult and entered into the real world I realized that everything is not necessarily black and white," she recalls, explaining what promoted her to make the film. "My mom was going through her own struggles. I went to therapy for a while.”


Auger says there were so many points in her life which brought her to bringing this film to life, but one of the major turning points was giving birth to her daughter, Kiyomi, and realizing how sacred she was to her: “When I had my daughter—wow—everything changed,” she says.


Several years after her daughter's birth, Auger went back to post-secondary and graduated—and her mother entered into sobriety.


“I wanted my story to be raw. I wanted it to be real. I wanted it to reflect who I am and because there's so many things that I went through that aren’t necessarily talked about in the Black community, like her generational trauma and mental illness,” says Auger. “I held in so much of my own pain for so long it just started to eat at me so I wanted to give myself a chance to express some of things I've held in for so long for my own personal growth.”


Auger adds that she’s always been a writer and she dabbled in YouTube, but taking part in the Being Black In Halifax film program was the first time she tried her hand at more formal filmmaking. “This wasn’t just an opportunity I made up in my head because of the Fabienne Colas Foundation. This was a book I had been writing for years,” she says.

“A lot of what I do is kept to myself, so now for the future, I just want to be able to open up a little bit more and take those opportunities and not bury those creative ideas,” she says. “Any one of my projects up next will still have that raw, transparent, honest and resilient vibe. I want my work to always reflect me.”