Choreographer Rebecca Lazier’s There Might Be Others has its Canadian premiere with Mocean Dance. 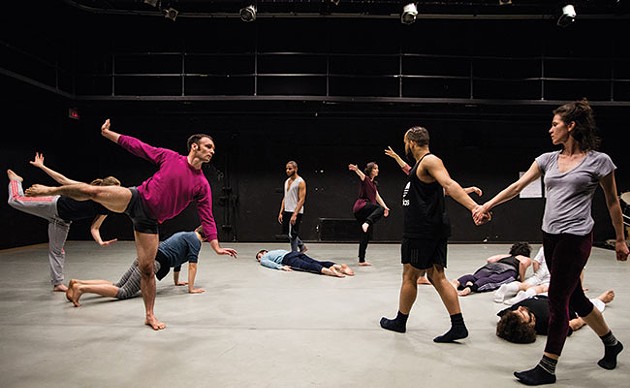 What happens when 15 dancers and 12 musicians take the stage together?

"People who have seen the show before say it feels like humanity in action," says Sara Coffin. Coffin is a dancer and co-artistic director of Mocean Dance and will be performing in the Canadian premiere of There Might Be Others. It will appear on June 4 for one night only as a part of the Scotia Festival of Music.

Rebecca Lazier, formerly a Haligonian and currently a New Yorker, directed and choreographed the show, and the work has local roots. In 2015, it was workshopped with Mocean dancers at Ross Creek Centre for the Arts in Canning, Nova Scotia. The world premiere took place in March of 2016 at New York Live Arts, which featured both Coffin and Mocean dancer Rhonda Baker.

There Might Be Others is inspired by American composer Terry Riley's semi-improvised 1964 work In C, and is performed as a series of 40 modules. The dancers and musicians are given a set of rigorous parametres, but have complete agency over much of the performance, including the order in which the modules are presented. As the work unfolds, the emergent composition explores collaboration, decision making, but also the sheer exuberance of a mass of people flinging themselves artfully around a stage.

The book that accompanies the work, containing instructions for the dance and music, has such module titles as "Zombie," "Whip It" and "Christian Dior," so audiences can expect some humour amidst the choreographed chaos.

"It's quite abstract, but it's a lot of fun," says Coffin. "People see something of humanity in it, in all its shapes and forms. What the audience is witnessing over and over again is negotiation. A community of people negotiating a language together, negotiating time and space."

In addition to the five dancers from Mocean, the June 4 performance will feature dancers from New York and Poland. Some musicians are students in Halifax, while others are Toronto-based or part of New York's contemporary music ensemble, Mobius Percussion.

"It's interesting to have these distinct communities for the performance," says Coffin. "We've become a sort of society onstage with a set of rules and a language that we understand. You see people coming together. A whole group against one person, or the group falling apart. You see conflict. There are these magic moments where we always say yes to an idea."

The Scotia Festival of Music will also feature the Canadian premieres of two other pieces by Lazier as part of Highlight Concert #4, scheduled for performances on Thursday, June 1.