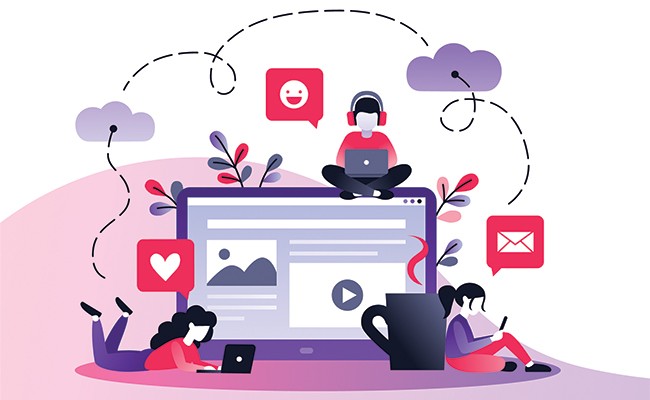 Nowadays, students may look at hashtagged keywords or 280 characters to learn about a school event, versus checking bulletin boards or even email, causing universities to re-evaluate communication methods.

“Social media is so important when it comes to connecting with students because you really need to go where they are,” says Kate Elliot, a social media advisor who has worked with both Dalhousie and Saint Mary’s Universities.

“It’s important,” says Elliot, for universities “to be there, so they can take part in that conversation and really connect with students they wouldn’t have the opportunity to otherwise.”

Alison Delory, associate director of integrated marketing and communications at the University of King’s College, says King’s has always been a close-knit community, due to its small size. However, since the onset of social media, there’s been an opportunity to strengthen that connection.

“Whether it’s sharing stories or photos or a person’s writing, it just makes the community feel real and not like an institution. It personalizes it,” she says. “It’s a space for us to get to know our audience, but also share our stories so we can be relevant, entertaining and engaging.”

“When I was in university, social media really wasn’t a thing and I didn’t really know any of my professors or the president of the university. Now that’s completely changed,” she says. “Social media allows [professors and presidents] to connect and have a authentic relationship with students and vice versa.”

While some professors have public social media pages, the platform hasn’t fully crossed over to the classroom. Rohan , a Dalhousie English professor, is reluctant to use social media in class. She says she wants to use her 60 or 90 minutes to teach and have face-to-face conversations.

“I have used class hashtags to keep the conversation going outside of class, but I didn’t make it a requirement,” says Maitzen, who has been on Twitter since 2010 and blogged since 2007. “But, I do know some people who have had Twitter chats for their classes.”

General Twitter interactions with students are rare. “For me, on I don’t see a lot of undergraduates on there,” she says. “My impression is they are other places, or if they are there they’re not interested in following their professors.”

Even if a professor isn’t using a social platform to teach, it doesn’t mean students can’t use them for studying purposes.

“Graduate students who are working on their thesis are using hashtags to help them have virtual writing groups,” says . “I think, if undergraduates wanted to do that, I would encourage them to come up with essay-writing hashtags or things just to motivate them.”

“It’s not required learning, per say, but he will enrich classroom discussions through his blog,” she says. “I think it’s a benefit to our community that they can continue these conversations online and in person and they can have a deeper learning experience.”

Still, with so many channels, universities have to choose which platform works best.

“We’re always trying to look at who our audience is, what our messaging strategy is and how to marry the two,” says Delory.

Elliot says as new social media channels arise, universities and their faculties shouldn’t automatically sign up for an account. They need to find a balance of social media that works best for them. Students will find and if they need to.

“Students are starting to understand that if they want to connect with those people,” she says, “they have to go there.”

Back To School Back to School Social Media