Thanks to some encouraging words from Nova Scotia’s finance minister and a major grassroots movement, Nova Scotia’s wines may soon be able to find a greater audience. 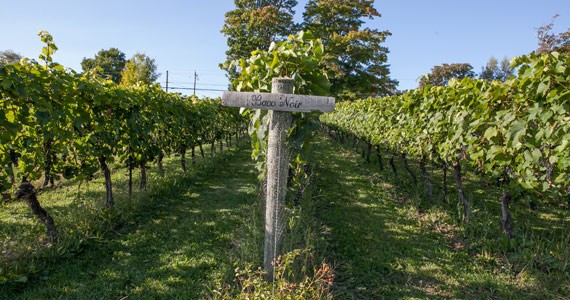 Thanks to some encouraging words from Nova Scotia's finance minister and a major grassroots movement, Nova Scotia's wines may soon be able to find a greater audience. by Craig Pinhey

If you truly love Canadian wine, the recent comments by Nova Scotia's finance minister Maureen MacDonald might have you chanting "free my grapes!" MacDonald indicated in statements to the media that her government is in support of the recently passed Bill C-311, which legalizes buying wine from out of province and having it brought across the borders ---in person or by shipping---for personal consumption. It was a BC federal Tory's private member's bill that was accompanied by a major grassroots lobbying effort (spearheaded by freemygrapes.ca) that manifested itself on the internet, particularly Twitter, receiving support from all across the country, including from NS MP Scott Brison.

The details of the Free My Grapes lobbying effort and its resulting impact on various provincial liquor boards can be studied in detail at freemygrapes.ca or winelaw.ca, a useful site that has been updating changes to interprovincial wine shipping laws.

Bill C-311 only makes it legal on the federal level, so all provinces still have to be on board for this to become a reality, allowing folks to buy wine from other provinces and have them shipped to your home. It also only applies to personal consumption---restaurants cannot order wine this way for resale.

The statements by MacDonald appear to fly in the face of what the NSLC wants: Thus far the NSLC has been silent on the issue and the silence speaks volumes. Most provincial liquor boards have generally been against this opening of the borders, claiming that it will cost them revenue and will be the thin edge of the wedge leading to the demise of government-run liquor sales. The NSLC already gave up some power when four Halifax area private stores were opened, and Bill C-311 could well be considered another step towards privatization.

Thus far only Alberta, which fully privatized liquor sales years ago, and Manitoba, whose liquor board already gave the OK, appeared fully open to direct interprovincial sales, although Ontario and BC are arguably open for "direct to consumer" business according to winelaw.ca. In any case, this ray of hope from Nova Scotia is timely and good news for Nova Scotia wineries.

Simon Rafuse, winemaker at Blomidon Vineyards, is happy about it. "We always hoped inter-provincial shipping would be allowed," he says. "But, we weren't holding our breath."

Rafuse feels that it could be significant for their business. "With such a small population here, being able to access the rest of Canada is huge for producers. It will allow us to increase the production of some of the products we can do best, like sparkling wines, because there is only so much we can expect to sell in the provincial market."

Stewart Creaser of the recently opened Avondale Sky Winery agrees in principle. "We support the concept of Canadians being able to purchase wines from any province in limited quantities for their personal use," he says. "Interprovincial trade barriers in general go against the notion of Canada being a nation with equal rights and opportunities."

That said, he notes that the NSLC has been very supportive of Nova Scotia wine, and any increase in sales would be small. "The anticipated future sales for our winery for wines shipped outside Nova Scotia would be in the 2 to 5 percent range, maximum," he says, "as shipping costs for a heavy product like wine will naturally have a limiting effect."

While that small increase in sales is very significant to a small winery, it shouldn't concern the NSLC. Bill C-311 was intended to only apply to Canadian wine, although there is some argument that free trade rules may allow any wine to be sold this way. But, realistically, the shipping costs would prevent anyone but serious wine hobbyists from buying out-of-province wines.

A small amount of wine may move out of the province, but it is unlikely that much will be shipped in, simply due to cost. Premium wines from the best wineries sometimes make it here, either at the NSLC or at private stores like Bishop's Cellar, where they sell wines like two-time Wine Access Canadian Winery of the Year Tawse from Ontario and BC's Quail's Gate, with others soon to come. But the prices, after shipping and mark-ups, are high. As Bishop's Cellar's Matt Rodgers points out, "a $20 wine in BC might show up as $35 on the shelf."

Consumers who purchase directly from wineries might be able to do a bit better than that, but it depends on whether the NS government tries to grab its pound of flesh with a tax, or attempts to put a limit on the amount. Even the most open scenario would mean wine hobbyists craving specific wines could buy the odd case, which would barely impact what the NSLC sells in a year.

Now, if restaurants were allowed to import wine for resale, that would be a different matter. And until that happens, Canadian grapes will not truly be free.

Craig Pinhey is a sommelier and freelance beer, wine and spirits writer. Sip some more at frogspad.ca or @frogspadca.