After too many people enjoyed a sunny day, Nova Scotia becomes the last province to take this step. 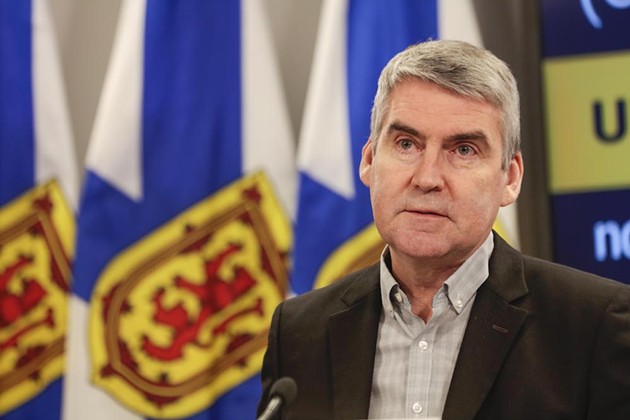 TBH Nova Scotia, Dad is disappointed. Too many of you went to the beach on sunny Saturday and were "blatantly disregarding" the guidelines to stay two metres apart. As premier Stephen McNeil said Sunday morning: "we're dealing with a deadly virus."

Effective yesterday, Sunday, March 22, the province of Nova Scotia has declared a state of emergency—essentially giving government power to suspend the normal rules in the name of the greater good in an emergency—hoping to shake citizens to take the threat of coronavirus seriously. The SOE will last two weeks, unless it is extended for another two weeks, or cancelled early.


Gatherings are limited to no more than five people and law enforcement now has the power to tell you to obey social distancing and self-isolation measures—if you refuse, you'll have to pay a $1,000 fine ($7,500 for businesses).

Trails remain open but provincial parks and beaches are closed. Businesses that operate under social distancing rules (allowing in no more than five people at a time, who are standing at least two metres apart, and the business provides an opportunity for sufficient handwashing) can continue to do so for now.

Anyone arriving to Nova Scotia from outside the province must stay home and out of contact with others for two weeks—police are at the border letting people know as they arrive in Nova Scotia. (This is new, up until today, only international arrivals had to self-isolate.)

And following suit with the province, HRM announced Sunday that all municipal parks, beaches, playgrounds, sports fields and courts and trails are closed until further notice. They are meeting today about possibly getting trails back open, but as of now, it's a walk around the block for you.


McNeil stressed that each Nova Scotia has a moral obligation to take this seriously, stay in their homes and keep each other safe.

Chief medical officer of health Robert Strang announced 13 new confirmed cases in Nova Scotia on Sunday, bringing the total to 28. He urged Nova Scotians to use their common sense: Have just one person go to the grocery store and "don't take your kids." Also, "do not pile into a car, go for half an hour, park next to 100 other vehicles at a beach and then crowd on to a beach or into a park, that is not using common sense, that is not adhering to public health measures."

And while it's still OK to go for a bike ride or for a walk, "make sure you do it while respecting social distancing."

"We need to work together to protect those most vulnerable in our communities," said Strang. "To protect our health care workers who are stepping up and willing to put themselves at risk to look after us."

And with sage advice that we'd be good to adhere to now and forever, Strang urged Nova Scotians to start with compassion before narcing on their neighbours.

"Maybe there's something they're struggling with that they need help with, that's forcing them to come out of self-isolation," he said." "So rather than be negative about each other, I'm encouraging people as a first step is let's figure out how we support each other, to help those who need to be in self-isolation stay in self-isolation—before we go to an official complaint."

As the total number of cases in Canada surpassed 1,400 (and the death toll in Italy reaches over 5,400), Strang insisted that Nova Scotians see these measures as our opportunity to learn from other provinces and the rest of the world and do things better. "The time is right in Nova Scotia, we can make an impact."


As always: Keep washing your hands. Wipe commonly used surfaces. Stay home if you feel sick. Check 811 to see if you qualify for testing—if you're sick but don't qualify, stay home anyways. If you feel sick, don't go to work—and be kind to those who have to.

Although prime minister Justin Trudeau announced Sunday that there wouldn't be a national state of emergency announced, with Nova Scotia's announcement every province and territory in the country is now officially in either a health or a state of emergency. Here's a timeline of when the emergency measures were enacted, and the number of diagnosed cases (as of Sunday) in each province/territory.