Both the PC and NDP parties pick up big gains, but Stephen McNeil comes out on top. 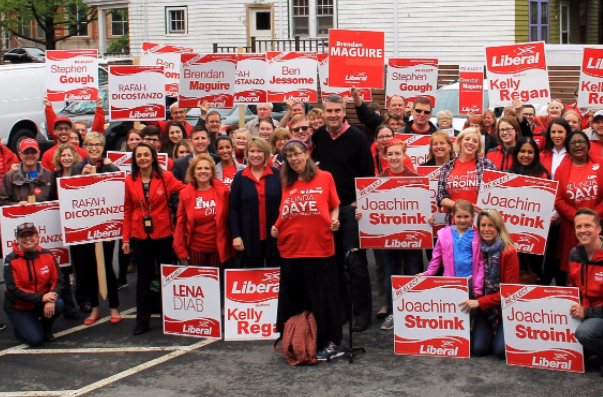 It was a night of twists and turns, but the Liberal Party will once again Nova Scotia's government.

The victory was bittersweet, though. Stephen McNeil's second mandate lost several important seats, and just barely held onto the party's majority at Province House. Still, the premier-designate called the night's results “democracy at its best.”

“Nova Scotia, you have spoken,” McNeil told an assembled crowd in Bridgetown.

The Progressive Conservatives, meanwhile, are once again the official opposition, having picked up seven ridings for a total of  17 seats in the legislature. Keith Bain took back Victoria–The Lakes in Cape Breton from Pam Eyking, who unseated the former MLA four years ago. Challenger Alana Paon also pulled off a huge win against longtime Liberal MLA Michel Samson in Cape Breton–Richmond.

Progressive Conservative Jamie Baillie said it was a “great night” for the party.

“Look how far we've come,” Baillie told a crowd of supporters in Springhill. “Look at the gap we've closed. Look at what you've done.”

Both Baillie and McNeil picked up easy wins in their respective ridings. But the most dramatic leadership race went to the NDP and Gary Burrill, who overcame Liberal incumbent Joachim Stroink and PC challenger John Wesley Chisholm to become the MLA for Halifax Chebucto.

Burrill spoke at a rally in Halifax, saying he was moved with gratitude for his campaign team. Although the New Democrats had a smaller percentage of the vote than in 2013, the party was still able to pick up a total of seven seats.

Paraphrasing Yeates, Burrill called the results a “defeat more glorious than many a victory.”

A few ridings saw extremely close results, pushing predictions of whether the Liberals would form a minority government late into the night.

The final tally of seats will force Nova Scotia's new government to work much more closely with its opposition parties. Anticipating that, McNeil seemed to reach out to opponents during his acceptance speech.

“This election was about moving our province forward,” he said. “We have a plan, and the opposition parties have a plan. We can work together to make it better.”

The olive branch was also extended by Baillie, with some conditions.

“I think the people of Nova Scotia are saying they want their political parties to work together, and we get that message,” the Tory leader told party while warning that Conservative MLAs would not support the Liberals' recently proposed budget.

Final results and vote tallies from Elections Nova Scotia are still being tabulated (and will be adjusted in this post when released), but at the end of the night, CBC reported the Liberals had nearly 40 percent of the popular vote, which is down from nearly 46 percent four years ago.

The Conservatives saw a jump of 10 points, pulling in 36 percent of the vote. The NDP dropped by six percent, even while picking up extra seats (only five NDP incumbents were up for re-election).

There was also a big jump for the Greens. Nova Scotia's fourth party didn't win any ridings, but it did increase its vote share from 0.85 to nearly three percent. The Atlantica Party only pulled 0.5 percent.

Winners are posted below. The full results from Elections NS can be found here.