Second-hand hunter and clothing designer Roddy DeLeon has a passion for pre-loved fashion. 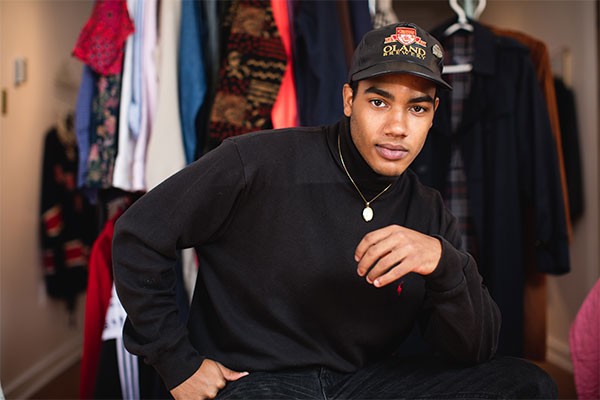 “I’ve always had an interest in clothing. My grandmother helped me with sewing when I was younger. I also had a tailor who let me shadow him a bit,” says Roddy DeLeon. The 21-year-old Dalhousie philosophy student hosted a vintage pop up shop over the weekend at Eyelevel Gallery for his Limited Supply Clothing Co; among the consigned items were his own designs.

As a kid, DeLeon found Halifax’s clothing options underwhelming, which is why he took things into his own hands.“Instead of sending out to get them, I just decided to make them. If that is what other people are doing, why can’t I?”
Optimistic about the growing fashion community in Halifax and interested in helping diminish clothing waste, his idea to launch a consignment line stemmed from noticing old clothes piling up at his own home, as well as friends’.

“I gathered their clothes and was like, ‘Hey I can sell these, they are really nice clothes,” says DeLeon.

He began to use his car as a moving thrift shop. Currently, the money he gets from the consigned items goes right back to the previous owner. With the donated items, he splits the profit. Basically, DeLeon is helping find old clothes a new home.
“I go to your house and pick up the clothes for you,” he says. “The whole idea is for you to be lazy and to get the money that you deserve.”

Limited Supply Clothing Co. currently carries plenty of unisex and men’s pieces but is looking to expand into women’s clothing as well. “We want everybody to be a part of this. It’s a co-op for the community by the community,” says DeLeon. “We are aiming to do a university tour where people can drop off and trade clothes. It’s a good way to let people know that there are people doing cool things here and there is a community for fashion in Halifax.”

To get in touch with DeLeon—or track down his next pop-up—follow Limited Supply on Instagram.