Right-wing National Citizen's Alliance spins the cancellation of its event as “caving into fascism.” 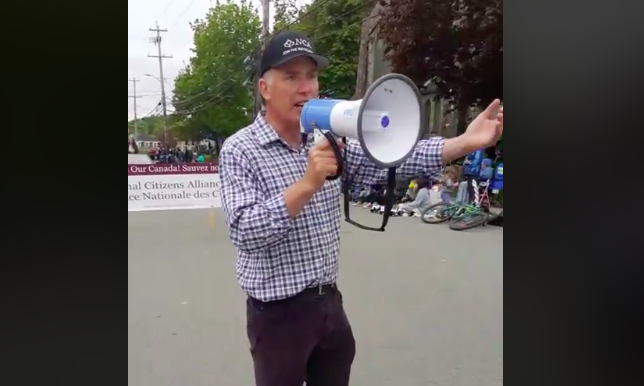 The National Citizen’s Alliance has had its “Public Discussion on Mass Immigration” event cancelled due to surrounding the anti-immigration party.

The NCA, an unregistered right-wing party, has been garnering controversy over the past year, having been banned from the Annapolis Valley Blossom Festival after promoting its platform in the festival’s parade. The group also had a follow-up meeting and rally in Halifax cancelled after .

This latest event, which was planned for Saturday, November 24, was cancelled after the Halifax Lion’s Club withdrew from the NCA’s contract to serve as a venue. The event was an open discussion on mass immigration where, according to the event description, “All points of view [were] welcomed.”

Stephen Garvey, the founder and leader of the NCA, held a live-stream to address the cancellation, in which he claimed that Club received approximately 70 emails and phone calls threatening to protest the event. Garvey also had harsh words for the Lion’s Club. He accused the club of “caving into fascism.”

“What this Lion’s Club board decided was completely disrespectful, and dishonourable to Canadian veterans that sacrificed their lives for our freedom.”

However, Lion’s Club member Wallace Thompson has a different story. He said the Lion’s Club originally had no idea who the NCA were. When they learned about the party’s rhetoric, they withdrew from their contract.

“We don’t affiliate with any politics or religion,” says Thompson. He also says there were no direct threats of protest made to the club.

The discussion’s lead organizer, John Evans, says he believes the NCA was targeted because it’s not a registered party—yet. He also describes the protests of his group as “something for a bunch of people to do because they can get away with it.”

One group whose members are always protesting the NCA is the Industrial Workers of the World—a solidarity union that’s been operational since the 1900s. Daniel Whitten, a member of the IWW’s Halifax branch, says the IWW opposes groups like the NCA because of the party’s “pseudo white- nationalist rhetoric.”

The NCA party has been affiliated with a white nationalist group called the Council of European Canadians, which is dedicated to preserving “Euro-Canadian” culture. The group is listed as an associated organization on the NCA’s website. Garvey has echoed similar views in his speeches, where he stokes fears about the “extinction” of European Canadians.

The NCA says it plans to continue organizing events and is planning a convention for the spring.