A brilliant solo comedian and Picnicface mainstay, Mark Little suffers the slings and arrows of his adoring public. And gives it right back. 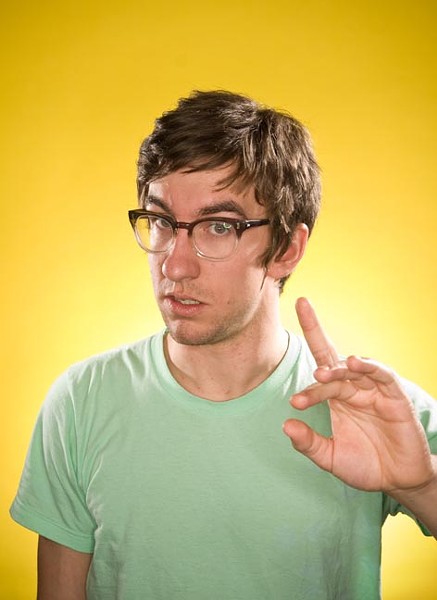 Professional comedy often comes from a dark place, born of anxiety and frustration, channelled into making people laugh. It can also just be a reaction to frat boys who yell at you from passing cars.

"Frat boys is just a generalization for that kind of guy," explains Mark Little, the Picnicface member, stand-up comic and Coast readers' choice for Halifax's Best Comedian. "I don't want to alienate anyone, I'm sure there are some very nice fraternity brothers who wouldn't dream of doing such a thing." Little remembers well his own suburban Vancouver upbringing and what he saw his fellow teens doing once they got their licences.

"One guy would be driving, the other guys would lean out the window and if they had eggs, they would throw eggs. If they didn't have eggs, they would hurl insults. And it was usually like, 'Fag!' or 'Nice bicycle,' usually stating what is happening before them, but in such a way as to suggest that when they turn back into the car they'll all high-five each other. They just ripped you good."

Though Little, 26, is from the west coast, he has found this kind of abuse follows him, and some of his Picnicface associates, all the way to the north end of Halifax.

"We just actually got egged recently on Robie Street. Cheryl got destroyed by an egg. I think it's a suburban mentality that gets brought to cities, especially Halifax, which is a college town, a vortex of former suburbanites."

Little thinks it's something about the way he looks. One weekday afternoon, at an Agricola Street eatery, he isn't immediately recognizable from videos or the stage. There's the shaggy hair, unshaven chin, dark blue jacket, brown cords and white trainers popular on local indie rockers and comedians, but there's also a pair of horn-rimmed glasses, offering a soupçon of anonymity. These dudes, though, they're on to him.

Little has been funny since at least high school. He got into comedy through the Canadian Improv Games, which provides theatre training to teams of high school students across the country. At 21, he was a counsellor at an improv camp, which is where he met future Picnicfacer Kyle Dooley, who he connected with when Little came to Halifax to go to Dalhousie. He and Dooley became a comedy improv duo while Little worked on a Masters in English. It remains unfinished.

"My parents were very proud," says Little. The comedy played a part in distracting him, as he and Dooley did shows at King's and at former punk club The Speakeasy. "As we got into the sketch comedy, I was writing more and more of that, so the thesis, by the end of it I had paid for three semesters but hadn't written a single thing, so I was like, 'Fuck you, Paul Auster.'"

Maybe giving Auster the boot wasn't a bad idea. Picnicface is a phenomenon, with eight talented members, touring and playing regular, sold-out shows and a massive internet presence, thanks to their videos. On his own, Little plays Yuk Yuks, does internet and television commercials, shows up in friends' film projects as a performer and writes his own short film treatments, applies for comedy festivals and does occasional television writing gigs.

Little makes sure to point out it's easy to look good when surrounded by the talents in his sketch comedy troupe. "So I've got the weird, unique opportunity---unlike most stand-up comics---of getting to work with some of the funniest people I know. It really is impossible to think that I'd receive any personal accolades if I wasn't a part of this group." He says the main reason he would receive more votes in Best of Halifax than the group or other individual members is because he's the most tireless self-promoter, performing more frequently. "I have the greatest need to be on stage at all times. The odds of having seen me at any point as opposed to anyone else in that group is probably two to one."

In Picnicface, Little writes and performs sketches in which he's playing a character, sometimes a stupider or more brash version of himself. But when he does stand-up there isn't that perception of him being a different person. He's a storyteller slightly uncomfortable in his own skin. "When it goes well, it's still as surreal, I guess," he says. "I guess stories get told on the very loose premise that I'm self-conscious or I get yelled at on the street by frat boys. And then I try to spin that into something that's more than just pitiable."

Little remembers doing a show in Moncton where the club owner suggested Little should drop a joke that compared himself to a chameleon. "It developed the ability to blend in to protect itself from predators like birds, and I developed in high school the ability to grow pimples to protect myself from predators like self-esteem," he says. The club owner told him the audience couldn't laugh because they felt too sorry for him.

Now Little has found a different way to tell the chameleon joke so it doesn't make himself the victim but rather the bemused observer. He tells jokes in reaction to what the French call l'esprit de l'escalier, that time shortly after an event when you think of what you wish you'd said in the heat of the moment. But the joke often still concludes with a dude getting a high-five from his frat boy buddy because, as Little says, "if a frat boy doesn't get a high-five every five minutes he actually sprouts a vagina."

"So many of my jokes,' he says, laughing, "if you break them down, they're just airing of my deep-seated insecurities. Why do I do comedy? Jesus Christ!"