Liv B wants you to make dinner tonight 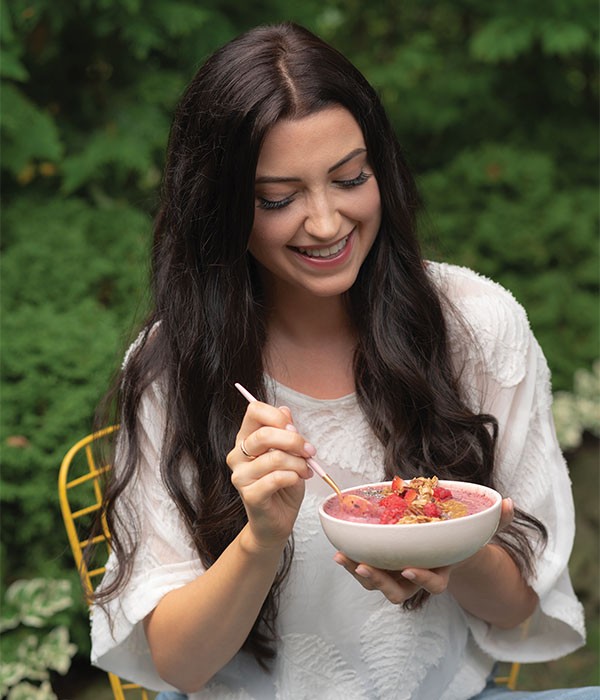 Olivia Biermann—or Liv B, as she’s known to her 635,644 (and counting) subscribers on YouTube—didn’t know she was about to get her big break when, two years ago, she uploaded a video about ideas for vegan, bento box-style lunches. “I had been doing YouTube for about a year and I decided to make this school lunch idea video and it was really beautiful and super-colourful, super-portable. That video ended up going viral and my channel went from 4,000 subscribers to 100,000 subscribers in under a month. After that, people started finding my channel by the thousands. There was a moment that was like ‘Oh, this is happening,’” she remembers as the phone line crackles.

Biermann began creating vegan versions of her favourite comfort foods (think dairy-free scalloped potatoes) in the early days of her undergrad. “When I was in my first year of university, I started having trouble digesting lactose and red meat so I started cutting those things out, and over the process of two years, I started a slow transition to veganism.

Eventually, I started looking into the ethical side of it and I decided that I wanted to stay eating this way for ethical reasons,” she explains.

Now, videos offering weeknight dinners in 15 minutes and meal ideas for $3 a pop define her brand of speedy, simple and cheap cooking. Meanwhile, she looks every bit the YouTube vet, starting videos with “Hey guys” and wearing high-end athleisure. “People who have been following my YouTube channel for so long will be like ‘I just realized after two years that you’re from Halifax’—they always think I’m from Toronto or LA or somewhere,” she adds.

But a giveaway of Biermann’s Maritime roots can be found in her recipes—particularly those in her upcoming cookbook, Liv B’s Vegan on a Budget (out Feb 15 ), which features familiar regional favourites like east coast-style chowder, gingerbread cake with caramel sauce and strawberry shortcake.

All of the book’s offerings are the sort of thing that could be whipped up in a spartan student kitchen, and a hefty chapter on baked goods and desserts makes Vegan on a Budget feel decidedly less diet-and-weight-loss focused than many of Biermann’s peers’.

“I have this recipe in my cookbook for maple curry and its just one of those recipes that I love because you can make it at the end of the month when maybe cash is getting tight. It was inspired by this restaurant I visited in New Brunswick a while back,” she says. “ so many vegan books where the recipes are amazing and super-impressive but most of the time they use expensive or hard-to-source ingredients, so something I focus on with my recipes is ingredients that most people can get at their local grocery store.”

“I’ll get inspired by a family recipe or something I grew up eating and I take it on as a challenge for myself to try and make a vegan version of it,” she adds. “What I’ve always tried to do is make recipes that are accessible, budget-conscious and things that anyone could make—and that’s what I tried to do with this book: Make something that anyone could pick up and cook from and not have it be this big, daunting thing.”