The Dalai Lama is hipper than you know 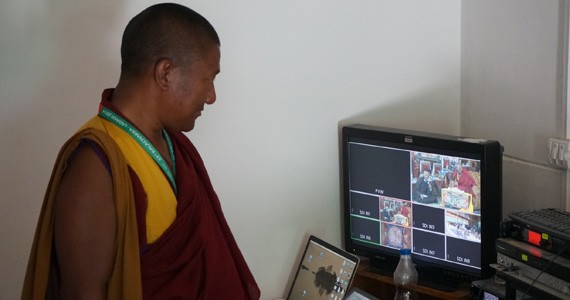 In the thin air of the Himalayan mountains, Christopher Helland sat at the feet of the spiritual leader of Tibetan Buddhism, the Dalai Lama.

As a Dalhousie University sociology professor, Helland was there on a research trip this summer in order to better understand how Buddhists have mastered the use technology to connect with their international diaspora community.

"It's an ancient form of Tibetan Buddhist practice and yet it's the most cutting edge use of the internet as far as religious groups go," he says.

Helland flips through his photos from his trip to India and shows snaps of monks wearing Google Glass, a nun texting during a religious ritual, a video control room and snazzy sound equipment. They have Bollywood producers who come in to help capture and live-stream rituals and the lamas' teachings around the world.

"Not only are they broadcasting to their diaspora community," Helland explains, "but they broadcast over the firewall into China."

In 1996, just as the internet became more accessible to the average Joe, Buddhists were already performing a service to bless the newly created cyberspace for religious activity.

Canada has one of the largest Tibetan diaspora communities outside of Asia. Rinzin Ngodup, 26, is a Tibetan student at Dal who has become a permanent resident of Canada after coming here in 2010. Ngodup says he's one of only about 10 Tibetans in the Halifax area.

"Before I moved here, I was not a practicing Buddhist. My parents were Buddhist, so I was a Buddhist, it's a link with our culture, it's tradition," he says. "After coming here and getting this freedom of wifi and YouTube...this was something that really educated me in what the role of Buddhism was."

Experiencing closeness to the Dalai Lama and his charisma can be important for Buddhists, but what Helland is trying to determine is what can be transferred through the internet and what is left out.

He says there is a physical aspect of the rituals that doesn't transfer. Mementos, usually cords made into bracelets, are blessed at these Kalachakra ceremonies, something that is difficult to replicate with someone sitting at their computer half way around the world. There are also some rituals that have been deemed too sacred to include in broadcasts.

Though most of what we hear in the media about religion entering the digital age is how extremists attract others to their cause using the internet, there is another story that is less apparent.

People "only see the negative impacts that religion might have," Helland says. "It is important that people understand the more positive benefits religion and religious beliefs can have. Where it's not the extremes of fundamentalists but the big middle that actually cares about other people, the golden rule kind of stuff."

In fact, he says Buddhists would probably feel this is the most important time to have an online presence—sharing their messages of compassion, of being a "ripple in the ocean."