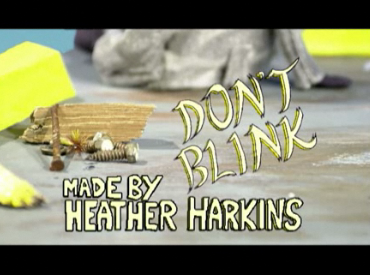 Award-winning Halifax animator Heather Harkins has two new projects on the go that will take her to points west of Nova Scotia. "I have been commissioned by the Toronto Animated Image Society to make an animated short that will screen for 12 straight hours at Nuit Blanche 2011 on the 300 television screens in the Toronto Transit Commission Subway System," she announces in an email. Nuit Blanche is the all-night city-wide art event in Toronto that inspired Nocturne here in Halifax. Last year at Nocturne Harkins collaborated with Mitchell Wiebe and others to make a Super 8 film that screened in the Public Gardens gazebo. Her audience at Nuit Blanche is liable to be a little larger: "Possibly over one million commuters will see my short, playing alongside four others without interruption from news or advertisements," she explains. Haligionians can check it out at onestopallnight.com during Nuit Blanche on October 1. If that wasn't enough, Harkins is also going to pursue her masters this fall, in film preservation and archiving at the George Eastman House in Rochester, New York. Harkins explains the relevance to her work and appeal of going to school in Rochester: "George Eastman patented and produced rollable film as an alternative to the glass negative, arguably making him the inventor of motion picture film, and founded the Eastman Kodak Company in 1892. The Eastman House is currently the world’s oldest photography museum and one of the world’s oldest film archives. Its Motion Picture Collection preserves the personal film collections of directors Kathryn Bigelow, Ken Burns, Cecil B. DeMille, Norman Jewison, Spike Lee and Martin Scorsese, as well as the largest single body of nitrate Technicolor negatives in the United States. (I doubt I'll be handling much of this as a student.) In 1996, The Selznick School of Film Preservation was founded in order to provide the next generation of archivists with the training and techniques necessary to continue the work of film restoration in the new millennium. It is the first of its kind to provide a comprehensive and intensive training program within the archive environment, thus giving students hands-on experience in all aspects of film handling, conservation, curatorial matters, programming, and both photochemical and digital restoration." Though the masters isn't inexpensive, the University of Rochester has offered her a fellowship. Also, the Association of Moving Image Archivists is giving Harkins the 2011 Sony Pictures Scholarship, with plans to publicly present it to her at their annual convention in Austin, Texas, in November. As Harkins goes off to become an internationally renowned academic, Haliwood Insider wishes her the best, and recognizes all her great work as well as her contribution to the Halifax arts community through the past decade. To check out one of her National Film Board animations, click here.