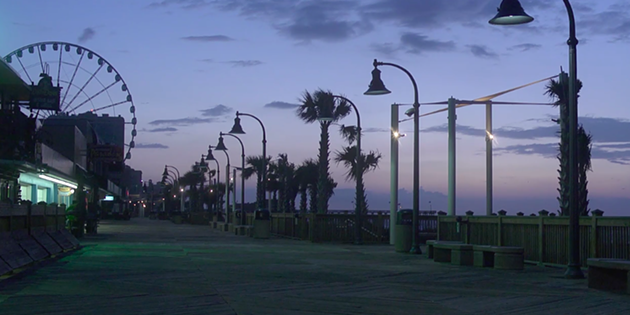 In January, locally produced documentary Myrtle Beach premieres at the 2016 Slamdance Film Festival in Park City, Utah, an independent complement to the Sundance Film Festival that same week. Produced, directed and shot by Atlantic photographers Michael Fuller and Neil Rough, the film follows a few Myrtle Beach denizens to create interesting and dynamic portraits of the human condition. Set against the gorgeous natural and artificial landscapes of the South Carolina vacation town, Myrtle Beach is stunning and emotional, desperate yet compassionate.

"The movie was an attempt, for me at least, to use a slightly different medium to explore the types of things I'd been exploring in my photographs," says Neil Rough, with 20 years of experience shooting all across North America.  In 2011, explains Fuller, "We drove towards Miami with a video camera and a loose idea for a film we wanted to make. The idea morphed, as it usually does, and the landscape of Myrtle Beach and the people there became our focus." Over the next few years, they returned to Myrtle Beach several times and shot the last rolls of footage this spring.

The film follows several real men in documentary vignettes of unusual characters telling their stories, like Wayne the self-appointed security guard, a veteran named Alvin, the cockatoo keeper, the homeless man and an old man named George, among others. "It's an observation of Myrtle Beach and the people therein, an attempt at finding the 'unfamiliar in the familiar.' It brings to the forefront select individuals who might otherwise go unnoticed," says Fuller.

"The images of the town exist as a way to give a setting to the place where the characters exist," Rough elaborates, "But the characters are the important part. I see a lot of humanity." With Fuller's production, Rough's experience as a photographer becomes apparent in the cinematography, balancing focus and light to show what's revealed through movement, and sometimes silence. Rough says he tapped into a feeling of mystery and hoped to capture it.

With funding through Arts Nova Scotia and private contributions, the film was completed with a minimal budget and edited by Grant Stewart in New York. All three will head to Utah in January for the premiere, and hope to enter the film in other festivals, while working on new projects.

Myrtle Beach - First Teaser Trailer from Off Season on Vimeo.