Loong way to the top 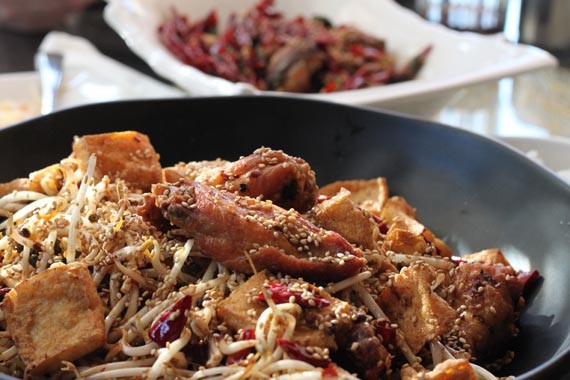 I had a craving for Big Plate Chicken when I went to Loong 7 last week.

Loong 7 opened late last year in the small space on Robie Street where the underappreciated Pars Restaurant—which, incidentally, is set to reopen in April on Barrington Street—previously sat. The menu is a mix of classic Canadian Chinese, and some more exciting Sichuan and Xinjiang dishes, like hot pot, stews and fragrant stir-fries.

The first time I went to Loong 7, I was impressed by the light spiciness of the gingery pork filling in the juicy steamed dumplings ($6.99). I equally was intrigued by spicy and sour pig's ear ($13.99): served cold with julienned cucumber, this dish has a sort of bright, zingy heat to it, with the soft snap of the ribbon of cartilage that runs through the boiled slices of ear giving it a texture nowhere near soft, but still falling somewhat short of crunchy. Then there was the Big Plate Chicken ($15.99). Spicy and savoury, rich and fragrant, I was immediately hooked. I remain hooked. I want to eat it every day.

Outside of the Canadian Chinese menu, almost everything at Loong 7 is spicy, with hot, numbing flavours of Sichuan cuisine at the forefront. While the stone bowl hot pots do happen to lack that intensity, you won't find much else that does.

I return with four friends, intent on Big Plate Chicken. But then I'm distracted by everything else. Our server, her English imperfect, is slightly flummoxed by our barrage of questions about spice level and dish components. She helps us find our way, though, and we end up covering our table—and the empty one next door—with bowl after bowl of food.

We get spicy and sour potato noodles ($7.99), julienned potato is stir-fried in oil, peppercorns and vinegar until al dente. A plate of tender sliced beef ($9.50), delicately flavourful, simply sitting in a pool of bright orange chili oil with green onion and sesame seeds scattered on top.

TNT chicken ($15.99) is chopped on the bone, fried a crisp golden brown and tossed with a pile of dried whole chilis, slices of green onion stalk rendered sweet by heat, chopped garlic and chunks of tender ginger. Sesame seeds add a final nutty punch to the spicy dish.

The mala yummy pot—a dry, stir-fry take on hot pot—is spiked with a prickly heat. The base pot ($5.99) has had tofu ($7.99) and chicken wings ($10.50) added to the pile of firm bean sprouts. I find the keen heat a bit more stinging in this dish than in the others—it's impressive that the variety of flavour in the dishes is not lost in the Scoville scale.

The Big Plate Chicken has both the fiery burn and numbing effect of dried chili peppers and Sichuan peppercorns, but also hums with the warmth of Central Asian-influence found in Xinjiang cooking: spices like cumin and cardamom. Silky coins of potato, chunks of green pepper and chopped, bone-in chicken sit in a fragrant, oily broth. It could also be served as a soup, we are told. We eat it with rice.

The tofu stone bowl ($9.99), with huge florets of broccoli, is a clean, salty broth that is a mild counterpoint to the heat found elsewhere. Pork belly with kale ($14.99) also has markedly less heat than the other dishes. It is instead salty and slightly tart, succulently earthy.

When it's clear we've had our fill, our server surprises us with a warm, freshly made red bean rice cake, a dessert to celebrate the impending New Year. It's a perfect end to our long lunch.

By dinner, though? By dinner I'm craving Big Plate Chicken.

To write your own review of Loong 7, click here.