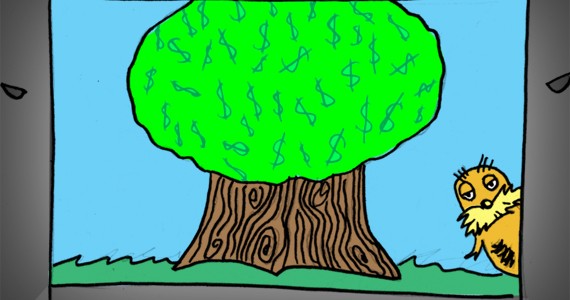 I don't remember reading The Lorax when I was a kid. I read it to my kid now. But I'm not a Lorax purist.

So, on a Friday afternoon I hit the Empire and paid my $13, got my 3D glasses in cellophane wrapper and prepared for a sermon.

There's no church of environmentalism, so lacking in stained-glass reminders of our creed, films like Dr. Seuss' The Lorax must suffice.

I'm not sure what the movie is meant to achieve.

Reuters, seemingly taking straight from a statement by the makers and the 70-plus greenish companies they have product-placement deals with---including Mazda with its not-all-that fuel-efficient "truffula-tree certified" CX5---reported: "By bringing Dr. Seuss' messages from The Lorax to consumers, [Universal] and its partners hope to help empower consumers, young and old, to make more informed choices for their families and the environment, as well as support smarter, environmentally-conscious choices in everyday life."

(Dr. Seuss, by the way, started as an advertising cartoonist, and did work for Ford and Standard Oil.)

My guess is the reality behind this movie is a save-the-world/make-money hybrid. I have no inherent objection to this combination, but the irony of re-upping a classic anti-capitalist critique into a Hollywood vehicle, starring the heartthrob-du-jour, is not lost on me.

The movie got me wondering for the millionth time how humanity might survive another 200 years, or more. I'm a constant advocate of mainstreaming, getting off the green pulpit and into the suburbs, where mainstream culture dominates, and doing what Seuss' Lorax book tried to do: wake people up, demonstrate the need to protect habitat from greed and the cancerous growth of the latest trend.

But the mainstream has a tendency to drown all that is sustainable in its undertow: When Walmart goes organic, rainforests die.

And when a sweet little book about a "misanthropic ecologist" (as Nature magazine described the title character), with a prescient message of restraint, gets made into a 3D blockbuster, the psychological complexities of human insecurity, fear and greed get boiled into one nice guy turned bad, who is later redeemed, and one arch-villain who never learns.

Both have humble (white trashy) beginnings and follow the American dream to great, and temporary, riches. 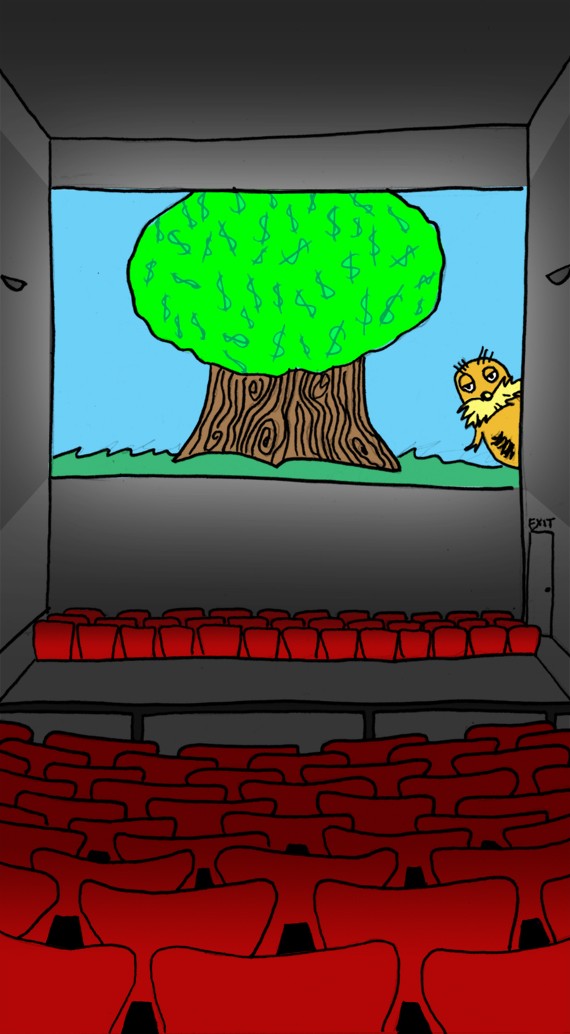 I'll leave the quality, or lack thereof, of the movie for the cultural critics to argue, but suffice it to say the blockbuster version of the sweet little book suffers for failing to hang culpability for the environmental crisis on the consumers. In the world of Dr. Seuss' The Lorax, the insecure, evil producers shoulder almost all the blame. The rest of us are blissfully ignorant of the apocalypse over the wall.

But hey, it's for kids right? The theory I often hear is that if you teach kids respect for the environment, they teach their parents.

But what happens if the kids don't get it? Like the little girl in the theatre who, when the trees were all cut to mass produce thneeds (which everyone needs) and the animals began their forlorn refugee march, said: "Why are they all leaving?"

The reality is, most learning goes the other way: Our kids learn from us.

Subsequent generational values can shift with new information, experience and technology. But there are severe limitations to the changes cultural producers and educators can make if parents keep modeling their prioritization of really cool new products over livable habitat, clean air and water.

So, what is the role of ecologically themed kids' movies like Lorax, Wall-E and Happy Feet?

It's nice that environmental ideas have sufficiently dissolved into the mainstream that they have become Hollywood fodder. But they'll only have meaning if the adults use that moving-picture magic as a vehicle for further conversation.

We could start by asking our kids how the cellophane packaging, on disposable 3D glasses, relates to the barren landscapes left in the wake of the thneed craze.

Chris Benjamin is the author of Drive-by Saviours, a novel, and Eco-Innovators: Sustainability in Atlantic Canada.