Cathy Ostlere’s play Lost: A Memoir investigates her brother’s disappearance and provides a meditation on her grief. 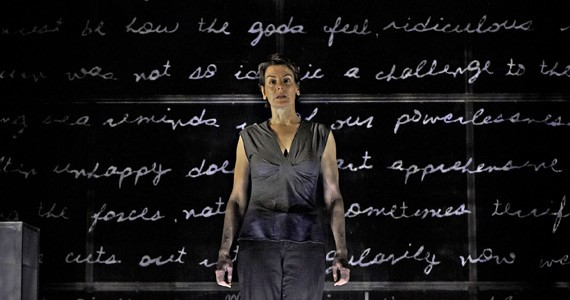 In August of 1995, Cathy Ostlere's brother David and his girlfriend set off on a voyage in a 27-foot sailboat, from the coast of Ireland to the Island of Madeira 1,200 miles away. It was a voyage that ended in mystery and tragedy.

The story of the ill-fated journey was originally told by Ostlere in a 2008 book called Lost: A Memoir, in which the first-time author recounted her own journey to Madeira to discover more about the fate of her brother, a quest that she says led to her also finding out more about herself.

From there, the book embarked on a journey of its own, falling into the hands of Theatre Calgary's artistic director Dennis Garnhum who immediately saw the potential for bringing the story to the stage. Together, Garnhum and Ostlere reworked the manuscript into a play.

"I've noticed that a lot of memoirs are written in the past tense with the view to looking back over the events, but I consciously chose to write this story in the present tense," says Ostlere over the phone from her home in Calgary. "I kind of think that it was that voice and that tense that spoke to Dennis, and hopefully speaks to the audience."

Lost: A Memoir is a one-woman show starring Jan Alexandra Smith opening at Neptune this week. It had its premiere in Calgary last year and is presently playing at the Indiana Repertory Theatre Company's Going Solo Festival in Indianapolis.

Ostlere, who sees the merits of both the larger Calgary production that will play here and the more intimately staged Indianapolis show, says that although it can be very difficult to see "herself" on stage and to relive the tragedy over and over, she has found a way to cope.

"I've developed the ability to watch the play simply as a writer. But for the last show in Calgary, I watched it as myself, and I was able to actually let myself feel it. It was hard and lovely," she says, sadly. "And in Indianapolis, I was quite unnerved because the actress there was playing to a much smaller audience and I was completely blown away by the nuance she brought to it."

Ostlere's children, who are all in their 20s, have read the book and have seen the play and they've expressed their pride and approval in their mother's work, as has Ostlere's surviving brother. But her elderly parents have not yet seen it, and may choose not to even when it plays in their hometown of Winnipeg after Christmas.

Ostlere understands. "I can only imagine how difficult it would be for them. I mean, not only would they have to relive the loss of their son, but they have to watch their daughter's life unravel in front of them."

Bringing the play, which is at its heart an ocean adventure tale, to the port of Halifax seems very fitting to Ostlere.

And this particular adventure story also offers a kind of meditation on grief and a bit of a sleuth story.

"I'm the kind of person who isn't satisfied until I get an answer," Ostlere says.

"I really needed to pursue what happened to my brother until I could feel satisfied that I found as much as I could. And while I didn't find out everything, I guess I can say I found out enough."