Layla Seafood and Mediterranean Cuisine is as delicious as it is charming. 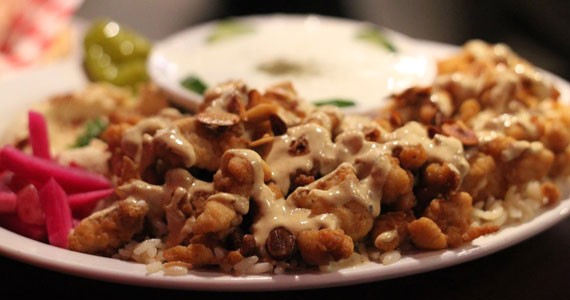 We've all heard about the exception that proves the rule. Well, that exception has a name: Domino's.

Domino's, I've discovered—as much as a crackpot theorist can discover—is the linchpin that holds the precarious perfection of 480 Parkland Drive in check. It's the only explanation for how goddamn good the other restaurants in that strip mall are.

A casual takeout joint, Layla Seafood and Mediterranean Cuisine has a markedly different vibe than its neighbours at Tako Sushi & Ramen and 9 + Nine. For me, the restaurant's name evokes a melting pot of fresh Greek, Italian, Lebanese and Turkish seafood dishes like fragrant stews, cioppino and citrus-kissed seared and grilled fish. The reality is fish and chips. Not that that's a bad thing, as Layla quickly proves.

It's Friday night and it's not too busy. A few small groups are scattered about, tables piled with food. The edges of plates with shawarma, kafta, souvlaki, tabbouleh, hummus and labneh rub up against one another together. It smells really good, a blend of golden fry, fresh herbs and pungent garlic.

The restaurant is set up so you order at the counter and then they drop off the food at your table. After ordering we settle into a table that's nestled against the wall. A few minutes later our fattoush ($5.99) is brought over. We've forgotten to pick up cutlery, so our server kindly flits across the restaurant to pick some up for us.

The fattoush, a Lebanese bread salad, is a lovely mix of crisp textures and mild, bright flavours. Lettuce, tomato, cucumber, red onion, sliced radish and a scattering of parsley are tossed in a fresh, light olive oil and lemon dressing. A sprinkle of reddish-purple sumac adds to the tart, lemony flavour. It's perfectly dressed: heavy enough that it's satisfyingly flavourful, but light enough that the deep-fried pita never gets soggy.

The shawarma poutine is decadent. The fries are just OK; they taste like the McCain fake-out fresh French fries. But the juicy, beautifully spiced chicken adds a delicate hum of garlic and spice to the rich, curd-dotted dish, that gives it a savoury depth that makes up for the fries.

The fish shawarma is an exciting discovery. The fish isn't cooked on a cone, it's basically just haddock tips that are gussied up with a housemade tahini-esque sauce. The sauce is incredible: It is garlicky, tart and nutty, the latter flavour accented by a sprinkling of toasted sliced almonds. The fish itself is fresh and flaky with a pillowy, well-seasoned batter. The rice pilaf it sits on is nothing special, but it doesn't have to be.

Pickled turnip and peperoncini add pops of neon to the plate, and a bit of heat and acid to cut through a thick pool of hummus. My other side, a cucumber and yogurt salad, is a light, refreshing foil to the oil in the dish, but it's skimpy on the cucumber.

As we're fishing our meal, our server drops by the table with a smile and two small bowls of rice pudding for a surprise dessert. It's thick and creamy, only mildly sweet. I like it.

We pay our bill and chat with our server and the owner, who is clearly invested in the food, which is inspired by his grandmother. It's a really charming, friendly last impression. I'm eager to go back. So stay terrible, Domino's! I'm depending on it!