Love in the Resolutes Club

The Resolutes Club is a special place where the food is perfectly generic, the prices are low and the bartender remembers your name. 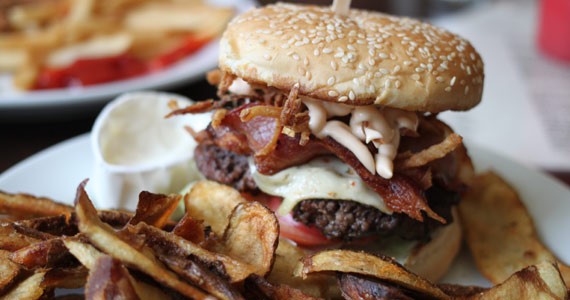 It's easy to feel behind the times when it comes to restaurants, with new places opening and old places closing like clockwork, almost as regularly as the sun rises and sets. But it's not often you feel a hundred years behind the times.

Started in 1901, the Resolutes Amateur Athletics Club of Halifax is the oldest members-only club in the province, a non-profit that has a mission statement to promote "athletic and physical improvement of its members and to encourage social activity of its members within the community." They use their member fees to support groups like Halifax TARS Rugby.

The club is in an inconspicuous little building on Inglis Street. Come Join Us, says a sign on the door. Never one to turn down an invitation, I did.

My first visit was with my friend Shawn, a member, and his wife, Ivy. We went for brunch. I had steak and eggs---a cheap cut of meat elevated with decent seasoning and deft cooking to a pretty perfect medium-rare. The eggs were equally well-cooked. Home fries and toast finished the plate with a little wedge of orange, and a passable cup of coffee rounded out the meal. The bill was 12 bucks: I was in love. I bought my membership when I paid my bill.

After a few more brunches and a wing night (40 cents!), I decide to head out for a night of music, a Northern Soul night put on by the Halifax Scooter Council. I meet a few friends for dinner beforehand.

Arriving early, I sit at the front, at one of the slightly sticky dark wood tables tucked into a banquette bench that runs the curve of the bay window. This is where I favour for brunch, too. A baseball game glows silently in the corner, a refuge from the soccer that has a crowd transfixed in the back of the bar.

The bar is a long curved line in the middle of the club. Beer pitchers hang above, and a jar of two-dollar pepperoni sits atop it. The only thing missing is a jar of pickled eggs. Light fixtures run the length of it like a row of low-flying UFOs. A window to the kitchen glows at the very end of it.

The bar essentially feels like an abbreviated Cheers. One of the bartenders has the same affable charm as Sam Malone, the other has none of the uptight pomposity of Diane Chambers. Upon learning my name, the former uses it each time I order a drink, not forgetting it as the crowd changes. The latter is never without a smile.

The crowd is diverse---young guys in hoodies and ball caps, retirees in checked shirts and knit sweaters, groups of young women drinking beer and playing shuffleboard, and older women sipping wine. I've arrived earlier than my friends, so I nurse a gin tonic and watch the game. Between the hollered OOHs and UGHs that punctuate a good or bad play, I catch a snippet of a conversation about the Halifax Explosion and another about a bad date.

When my friends arrive, they order some draughts and we get our food. I've opted for the signature Resolutes burger ($9.25) with potato skins on the side. The burger is huge and delicious with havarti and frizzy fried onions, the skins are super crisp. An assortment of other fried goods are scattered around: another burger, mozza sticks ($5.50), a buffalo chicken burger ($9.50), chicken fingers ($9) with fries. It's all cheap, generic fried food, and it's just great.

When I pay my tab, the bartender sorts through what looks like a deck of credit cards, still not forgetting my name. Charles Burrows Charles would be proud. It's the kind of attention that breeds regulars.

Honestly, the Resolutes Club is essentially immune to a review. You can take or leave it at face value---it's not pretending to be anything other than it is. And me? I'll take it.