Lucky number 13: Gypsophilia ends on a high note after 13 years

Halifax’s beloved jazz group does a victory lap before closing out a chapter. 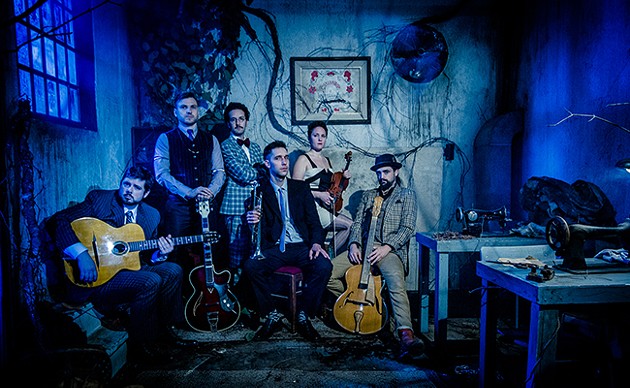 The year is 2004. Those involved in the music scene will remember this year as the moment stars aligned to form the jazz band Gypsophilia.

A gig at the Halifax Jazz Festival brought together the group of musicians, joining forces to create an unmistakably suave aesthetic, drawing from pre-bop American influences and the eastern european flair of Django Reinhardt, featuring Gina Burgess on violin; Nick Wilkinson on guitar; Sageev Oore on piano, accordion and keys; Alec Frith and Ross Burns on guitar and percussion; Matt Myer on trumpet and organ and Adam Fine on double bass.

This year, Gypsophilia announced it was laying the group to rest; an announcement which brought tears, an outpouring of nostalgia and support from many. The Jazz Fest performance July 16 will be one of its last, with the final concert held October 13 at the Marquee.

Founding band members Ross Burns and Alec Frith along with Matt Myer joined the Coast at The Local before a gig with Verbal Warning last week to share their reflections.

How does a band stay together for 13 years?

RB: Just get in with really good people from the get-go. We've never really had any of that stereotypical band drama; we've never even had a fight.

MM: (laughing) We don't have a drummer either.

AF: It's important to appreciate each other's eccentricities and try not to take anything too seriously.

What have been some of the takeaways from this journey?

RB: I feel that I've experienced high school, undergrad and a masters degree in being myself and playing music. I feel like the band is at its best and sort of found itself when we stopped trying to be a good band in a traditional way and just started being ourselves.

AF: Most of the people that inspire you don't stay in that little box. So, for me, the most traditional thing to do as a musician is to be honest about your influences and make new music that tells the story of where you got it, but is not the same.

Why are you closing this chapter?

MM: We all agreed that if there was four different versions of the band floating around, it probably wouldn't do it justice.

RB: It feels like a healthy time to stop playing because people are pulled in so many directions. From people in the band with babies, Gina going on tour with a rock band from Iqaluit, to teaching and Alec travelling to play reggae music, we're in a great position now to do more. The education we experienced together puts us all on a better foot to do the next thing.

AF: I don't think we'll lose the momentum of the band. We'll still have that as a part of our brand as individuals that will keep affecting us in a positive way. That's the good thing about leaving it on a high note, when anyone thinks about us it will be in a positive light.

What final message would you like to give your supporters?

RB: Thank you—which doesn't feel like enough, but I couldn't say more to make it what it should be. The music is still there, we're not taking it away. I was talking to a friend who was tearing up, saying, "Aw man, I listen to your records every day when I ride my skateboard." We would love if people told us those stories—don't keep those good memories to yourself.

MM: We've been really lucky to have a following locally, we fully appreciate all the support of the community. We wouldn't have stayed together as long as we did without that.

AF: Such a heartfelt thank you for allowing us to do this for so many years and have so many wonderful experiences with so much support. To anyone who was inspired by us: Make music, get together with your friends and give it a shot.