The Secret Library of M. Prud’homme is part art, part fiction and all intrigue. 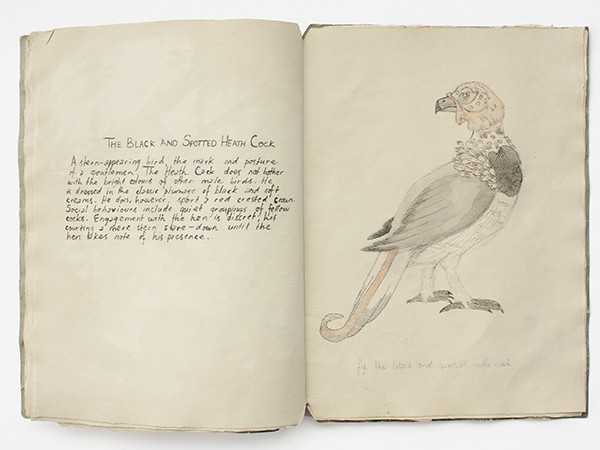 The objects from The Secret Library of M. Prud'homme don't quite make sense in a museum—though they are said to be old and rare—nor do they exactly belong in a conventional art gallery setting, though they were made by craftspeople and artists. The fact that this collection is called a "library" is more adequate, because a library is where you find works of fiction. This is exactly what M. Prud'homme's collection is made of: Fictions, fakes and forgeries.

The exhibition, which has the full title of Make Believe: The Secret Library of M. Prud'homme—A rare collection of Fakes, begins its cross-country tour in Halifax's Chase Gallery, fittingly (again) located in the city's archives.

The pieces in M. Prud'homme's collection are diverse, ranging from 13th century sheet music and an account from a female Russian cosmonaut's time in space to strange pseudo-scientific illustrations and a beaded sacred heart.

But they do have one thing in common: They are all fakes. According to the organizers of the exhibition, the objects, which had been collected since the 17th century, were anonymously donated to a French Canadian bishop by the name of Joseph Louis Prud'homme, who was reported to have worked as a secretary-archivist for the Vatican in his lifetime. When M. Prud'homme retired and moved to Pont-Viau, Québec, he brought his strange collection with him, where it piqued the interest of friends and local history enthusiasts.

The group assisted M. Prud'homme in researching the questionable origins of the objects and they were all discovered to be forgeries. Indeed, it was the fakeness of the objects that was their only common ground. Since M. Prud'homme's death in 1952, these Friends of the Prud'homme Library have cared for the collection and grown it with more fakes, hoaxes, and make-believe objects.

Imagining each forgery to be a fictional story on its own, the exhibition allows each object to be studied and expanded, with recordings of opera singers singing in obscure French dialects to match the sheet music, photographs and other ephemera.

The crossover of artist and author is fitting here, as so many of the objects are literary in nature. In "A Further History of Uncommon Birds," we find an amateur but charming account of 18 unusual birds said to have been discovered by a woman named Phyllis Primm, recorded sometime in the mid-to-late 19th century. From a chubby, hairless bird with feathers that resemble facial hair to a dandy of a bird called "Sir Penguin," a "gentleman bird [of] great status," the creatures in Ms. Primm's book are borderline fantastical, but presented in apparent earnest.

In another document, we see obituaries where all of the names of the deceased are perfect anagrams of the same name, somewhere between a prank and the author's dark and playful stab at immortality.

While the exhibition encourages a fair amount of whimsy (as the words "make believe" in the title would suggest), it also calls for scrutiny. On whose authority do we believe history to be true? If not 100 percent true, what makes histories different than stories? And what people, places or institutions do we place our faith in to tell us the difference?

One thing is for sure: In M. Prud'homme's library, not all is as it appears.