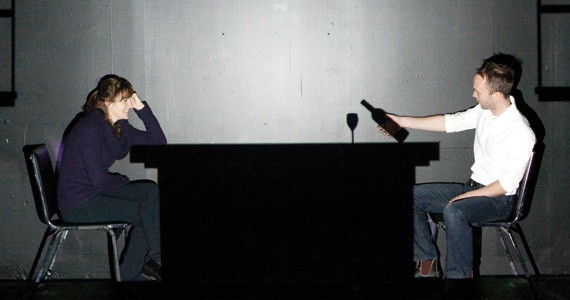 Francine Deschepper and Conor Green in When It Rains

June 19 to 29 in HRM will be a cozy tangle of productions, play readings, workshops and more, thanks to the Magnetic North Theatre Festival and Eastern Front’s Stages Theatre Festival.

The Magnetic North Theatre Festival is Canada’s only national theatre festival, each year the festival alternatives between Ottawa and a new Canadian city, and this year it’s our turn. Magnetic North is partnering with local company Eastern Front Theatre and their Stages Theatre Festival for their infinite local theatre expertise. And no theatre festival is an island, after all.

Cool your heels in a possibly air conditioned theatre and fill your dance card with local and touring Canadian theatre.

The 2014 Festival presentations are:

wag is directed and performed by Denise Clarke, one of Canada’s most riveting performers, and features Clarke as she dances her way through a solo work of tender stories and beautiful music that will leave you exhilarated and uplifted. Company: One Yellow Rabbit Theatre (Calgary, AB).
The show runs from June 19 – 22 at the Neptune Theatre Scotiabank Studio.

LEAR, directed by Philip McKee and featuring Clare Coulter, is a distilled and vital adaptation of King Lear that uses dynamic staging to present a modern take on the relationship between powers in decline, and the powers that stand to inherit. Company: Philip McKee Performance Projects (Toronto, ON).
The show runs from June 20 – 24 at Citadel High’s Spatz Theatre.

When It Rains, written and directed by Anthony Black, is by turns blackly funny social satire, heartrending meta-tragedy, and visually arresting theatrical illusion- an acclaimed production from one of Canada’s most heralded touring companies. Company: 2b theatre (Halifax, NS).
The show runs from June 22 – 25 at Citadel High’s Spatz Theatre.

Iceland, written by Nicolas Billon and directed by Ravi Jain, is set against the backdrop of the 2008 banking crisis when a confrontation between a real estate agent and a tenant takes an unexpected turn. Company: Why Not Theatre (Toronto, ON).
The show runs from June 24-25, June 27-28 at Alderney Landing Theatre in Dartmouth.

The Tale of a Town Nova Scotia, directed by Lisa Marie DiLiberto, is a launch to the national tour of a charming creation that celebrates main street stories gathered from people around the province. It is presented back to the community via a multi-media performance of sound bites, music and memories. Company: FIXT POINT Theatre (Toronto, ON).
The show runs from June 24 -28. Location TBA.

Dance Marathon is a joyous, moving and wondrously fun interactive event that has you strapping on your dance shoes to whirl around the floor, or cheer on your friends, in a modern spin of a 1920s endurance dance contest. Company: bluemouth inc. (Toronto, ON).
The show runs from June 25 – 28 at Olympic Community Hall and is suitable for all ages.

The National Elevator Project is an engaging project that features short plays (10 minutes and under) written for and performed in working elevators. You’ll ride an elevator with the actors, placing you in the thick of the story for an unforgettable one-of-a-kind performance experience. Company: Yes Theatre  Edmonton, AB).
The show runs from June 22 – 25. Location TBA.

Stella, Queen of the Snow, directed by Jim Morrow, is the world premiere of a much-anticipated collaborative effort. Mermaid’s stage adaptation of Marie-Louise Gay’s beloved book tells the story of two children as they spend the day in the snow discovering the wonderful world of winter. Company: Mermaid Theatre of Nova Scotia (Windsor, NS).
The show runs from June 20 – 21 at Alderney Landing Theatre in Dartmouth.

Two In The Coop, written by Ron Fromstein, is a comedy that follows two little birds as they try to cope when their mother flies the coop in this insightful, humorous piece about children’s fears – a witty delight for the whole family!  Company: Halifax Theatre for Young People, (Halifax, NS).
The show runs from June 20 & 22 at Alderney Landing Theatre in Dartmouth.

Pop-Up Love Party, directed by Alex McLean, is a work in progress from Zuppa Theatre. It re-imagines the famous conversation described in Plato’s Symposium and asks the audience to raise a glass to love in a multi-sensory feast of dance, theatre and thought. Company: Zuppa Theatre Co. (Halifax, NS).
The show runs from June 23 – 25 at the Lion & Bright Café Wine Bar.

Who Killed Spalding Gray?, written and performed by Daniel MacIvor, features the eminent Canadian playwright and actor as he explores his personal connection to the famed American monologist Spalding Gray in this compelling solo piece. Company: Re: Work with a Factory Theatre and Necessary Angel Co-Production (Toronto, ON / Halifax, NS).
The show runs from June 24-25 & 27-28 at the Neptune Theatre Scotiabank Studio.

Tickets for all above-mentioned shows as well as festival passes are available at magneticnorthfestival.ca/buytickets/