Making space for oppressed people is an act of love

“I will not stop doing everything in my power to make oppressed people feel safe and show them the respect that they deserve at my shows.” 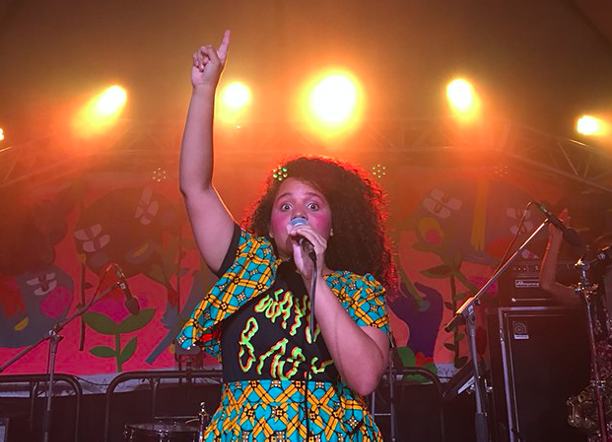 LIANNE XIAO
Lido Pimienta is a Polaris Prize-winning singer. This post first appeared on her Facebook, and has been shared with the author's permission.

When I was in bands with a bunch of men and boys in my tween/teenage years, no one bothered me. I was protected by my all-straight male bandmates. Once I launched my own solo project, all of the outside noise and interest in my music (for all the wrong reasons) began to open my eyes to the not-so-great side of music, the side that sees women as “second-class members.” Any female front-person performing in music has their stories of being groped onstage and having audience members engage them in a violent manner. It’s the norm.

As I did more solo shows, I noticed that Black and trans women who came specifically to see me at a festival often end up leaving early, because they’d been hassled by security asking for ID verification. Imagine being trans and having to “prove your identity” on top of being approached by people asking if you’re a girl or a boy.

I also started noticing how pregnant women had their nights out cut short at shows, no one afforded them the luxury of safety. As a mother, I’m well aware of this. And when there are children at my shows, they are not just at the front, but I put them on my stage.

With this in mind, I made the decision to address this issue by rearranging the room to the best of my ability at the start of the show. I started asking men to step back and for the women to be in front of them, as a tool for increasing safety in spaces for women, pregnant women, women of colour and Indigenous women (who, as statistics have shown in Canada, have a higher historical incidence of falling victim to sexual assault, rape, kidnapping and murder).

So then, how is it that an artist of African and Indigenous blood, who grew up in Colombia and gave birth in Canada, whose bandmates are two white men, is a racist? Well, because a reporter who was not at my show wrote a article, telling his readers that I kicked a white woman out of my show because she wanted to take photos of me. Imagine that…

There was a dedicated media/photographer area that this photographer declined to use at this show for whatever reason. Instead, she took photos of me at the front of the crowd by the stage and caused a ruckus. The photographer elbowed and shoved her way to the front, blocking peoples’ views, swinging her arms at me and screaming “WHY DO YOU HATE ME BECAUSE WHITE?” As you can see in video footage from the show, one of the band members alerted me to this, and we then stopped the performance and had security deal with her.

It had nothing to do with her skin colour, but because she brought violence to my show, in an area surrounded by people that have to deal with this kind of violence in their everyday lives. It’s my duty to provide a safe space for my audience, and when that’s violated, I do get involved.

When I ask men to go to the back, I am not kicking them out, I am not telling them I hate them, I am simply inviting them to be part of a generous gesture to ensure that women are safe. When I ask women to go to the front, it’s to allow them to be safer so no one will grope them, which is a fairly common occurrence at music shows. Men at the front will often be aggressive, and demand that I command their attention…this makes things worse for the women in the audience. Men to the back and women to the front means “let’s make it safer here for women, and show some solidarity, and allow everyone to be a bit more relaxed in the space.”

When I ask white women to let women of colour , I am not saying I hate white women. I am trying to show that white women have an easier time navigating the world than do coloured because their skin colour allows them to enjoy more advantages and a relatively higher level of safety. When we make space for women of colour, we are saying “we see you, we love you, we appreciate you” and allowing them to have a safe space from which to enjoy the show. This affects about 10-12 people at my shows in Canada, when it has been done in the past. This is meant as an opportunity to show them love, solidarity and compassion. What we see in the news is Black women getting shot by police at red lights, Indigenous women’s bodies in rivers, and we see no interest in finding out the reasons why they ended up there…

This gesture of giving space is an act of love, and it’s not a new tactic. I adopted it because it feels good, it makes me feel safe and it also makes other women feel safe. Making space for oppressed people is a tool to level up, or at least try to create a balance or temporary if you will.

I love my audience. I love men. I love all women, and I am inspired by everyone, but I am not blind to the unsettling effects of colonialism and white supremacy. I will not stop doing everything in my power to make oppressed people feel safe and show them the respect that they deserve at my shows.

I don’t have all the answers, but I have a lot of love, and the courage to challenge a system that was built to put people like me down. That’s where I’m coming from.