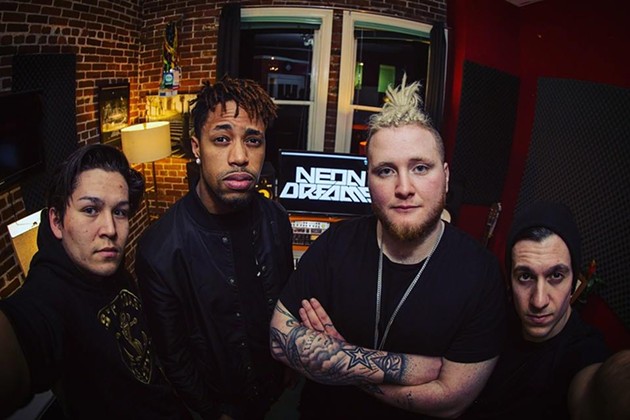 Neon Dreams (Matt Gats)
All Neon Everything for the NSCC
"The Halifax music industry is overflowing with incredible, underrated musicians who are yet to be discovered," says Emma Cassidy, one of the 21 students in this year's edition of the Nova Scotia Community College's Music Business Program. Tonight at The Marquee and The Seahorse (2037 Gottingen Street, 10pm, $8/$5), students in the program are putting on their first live music show called Manifest with two levels of live music featuring Halifax EDM-stars Neon Dreams, the super funky Roxy & The Underground Soul Sound, DJs Pineo & Loeb, alt-rockers The Brood and Best Fiends, a zoo of Elephants In Trouble and many more.

With her classmates Caleb Shriver and Matilda Bourque, Cassidy is part of the publicity team for the event, while the rest of the class was evenly divided between sponsorship, marketing and the venue team for the night. "It's a unique opportunity for us to put the skills we've acquired over the last eight months into action," says Cassidy. The live show is just one of many projects that the one-year Music Business Program uses to prepare students for a real-life career in the music industry to show the multifaceted nature of the industry and all the hard work involved in success.

"The biggest thing that I took out of the NSCC program was the ability to commit time and energy everyday to focus on the career that I was looking to build," says Corey LeRue, producer and musician with Neon Dreams and a 2012 graduate of the NSCC's Recording Arts program. The band's drummer Adrian Morris is also an NSCC grad. "It gave me great opportunity to network with like-minded individuals right in my hometown," says LeRue. "I feel like the foundation of the industry around here is starting to be rooted from the NSCC programs."

To further showcase the NSCC's relationship to the local music industry, Cassidy says all of the band's performing at Manifest were chosen because, like Neon Dreams, one or more band members studied in the NSCC's music business, music arts or recording arts classes.

"It's a one-night celebration highlighting the successes of NSCC students, past and present," she says. Many graduates can be found playing shows, recording music at Echo Chamber, managing artists or working events for the ECMAs, Music Nova Scotia and the Halifax Pop Explosion.  "As far as the job market goes, it’s a dog-eat-dog world," says Cassidy, who plans to stay local after graduation and move into artist representation. "If you want to make it, you have to be the best."

Why should you come out to Manifest? LeRue answers: "To support local people who are really grinding to make their career happen. There's a ton of diverse talent and it's going to be lit, fam."

Creating attractive publicity is just one element of a successful event.