Pinecrest-Highfield Park was designed and built so poorly that it was fated to become the city's most crime-ridden neighbourhood. But dedicated community activists are working to rebuild the broken social fabric, with promising results. 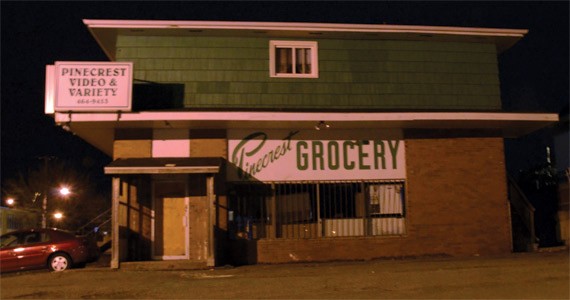 "There's a lot of quiet desperation in this neighbourhood," says Kees Zwanenburg.

The priest of Holy Trinity Emmanuel church, Zwanenburg's one of the most qualified to gauge the state of the souls who live in the north end of Dartmouth.

Just a stone's throw from the church is Victoria Road, and across that busy thoroughfare is Pinecrest-Highfield Park. Bound by Victoria on the west, Highway 111 on the north and Albro Lake Road to the south, it's an area that has long been in crisis. Packed with apartment buildings, the neighbourhood is a literal and figurative dead end.

Pinecrest-Highfield Park remains one of the poorest neighbourhoods in the city. Most homes are rented, people move frequently, incomes are near rock-bottom, a disproportionate percentage of families are led by single parents---mostly women---and there are high rates of government assistance. Many people live in shoddy housing.

And the police are there a lot.

Analysis of police call data by University of King's College journalism students shows that seven percent of all police calls for serious incidents from 2005 to 2010 are to the area that includes Highfield-Pinecrest. Among the most common incidents: assaults; robberies; drug use; weapons and attempted suicides.

Donald MacLean, the outgoing East Division commander for the Halifax Regional Police Service, attributes many of the neighbourhood's woes to the high-density apartments on Highfield Park and Pinecrest Drives. "What we see is the type of housing situation that contributes to the transient nature of the community, which probably plays a part in some of this."

The apartments are the legacy of planning decisions that zoned the area for apartment buildings, first on the semi-urban Pinecrest and later in the brand-new community of Highfield Park, built starting in the 1980s on the site of a former naval radio base.

The result was cramming thousands of low- to middle-income people into the same area, a recipe for the area's problems today.

Jean Hughes, former president of the Dartmouth Family Centre, attributes much of the neighbourhood's problems to fast development of the Highfield Park Drive apartments.

"A lot of people compare north Dartmouth and Spryfield," she says, referencing another of the city's high-crime neighbourhoods. "But Spryfield is a different community in that it has a history."

Spryfield is an old rural community that has transformed over the years. Though it faces its share of problems, community leaders and infrastructure have long been in place to accommodate residents. Highfield Park went from an empty field to a forest of apartments in less than a decade. "That area, that came out of nowhere," says Hughes. "There was no history, no buildings existed, there was no one living there."

Foster MacKenzie, former president of the Nova Scotia Association of Architects, says during Highfield Park's development he predicted the neighbourhood would quickly turn into a high-density slum: "Start erecting these high-density housing units, four and five storeys, very close together with very few amenities and you start putting low- to middle-income families in those areas with lots of children, you're going to end up with problems."

In 1991 the former Dartmouth city council tabled a report that laid out a series of steps to save the neighbourhood. Among other things, the Pinecrest Highfield Park Neighbourhood Plan called for aggressive rezoning to allow privately owned family homes, a key step to improve the community.

Although rezoning was rolled out, walkways were built and various park and landscaping initiatives undertaken, the number of privately owned homes continued to drop. Apartments were never redeveloped and large corporate property management groups still dominate the landscape.

The plan also called for more space for small businesses to service the densely populated neighbourhood, but today Pincecrest-Highfield Park has little more than a small Sobeys, a couple corner stores, pizza joints and a pub.

"The absence of infrastructure is an indicator of a lack of diversity and opportunity," says Grant Wanzel, a professor of urban planning and architecture at Dalhousie University. He says the design and development of the neighbourhood is central to why it has turned into a slum. "Highfield Park is a cul-de-sac; you can get in but you can't get out. It sounds kind of funny [but] it's not about symbolism; it's about physical reality."

Wanzel says much of the blame should be shouldered by government for neglecting a problem as it got worse, in one of the city's most populous areas: "On a per capita basis there's a pretty low level of municipal commitment to that neighbourhood."

While it would be tempting to write off the area that many call The Dark Side, there is another side to Highfield-Pinecrest: a small band of community activists fighting the decades of neglect that have created a place where many fear to go out at night.

Zwanenburg, the priest, runs several outreach programs out of the basement of his small, white-painted, cinderblock church on Alfred Street. One is Youth United, which attracts up to 40 teenagers every Friday to play games, watch movies, eat and just hang out. "We're not talking about saints," he says of the adults who work with the kids. "We're talking about regular ordinary people that show respect and affection and affirmation."

"Most communities can learn from people up in this area," says police constable Randy Wood. "It's a very vibrant community that's sometimes not portrayed properly."

Wood is the community response officer for Dartmouth North, but he's better known to residents by his nickname, "Uncle Randy."

Wood's job is to help residents any way he can. He doesn't normally make arrests or detain people; his role is simply to assist the community however he sees fit. One Wednesday a month he ferries people from the local food bank to their apartments, via a police SUV filled with grocery bags.

A dispute with a neighbour, difficulties finding work or even a cat with diarrhea--- all fall under Wood's purview. "It's not just Monday to Friday, eight to four, it's whatever is required," he says. "Sometimes that's nights, sometimes that's weekends."

He's reluctant to take time off for vacation because there isn't another officer who can easily take over. Wood's wife works in the Middle East, so although he doesn't live in Dartmouth North, much of his life is there.

"Without sounding cliche or anything like that, he really is the heart and face of the police for a lot of people in that community," says MacLean of Wood.

MacLean oversaw the Highfield Park area for the last five years and knows the challenges facing the community. The community response officer model was piloted in Highfield Park and its success led to implementation in other troubled Halifax areas.

MacLean says that while drugs, weapons and violent crime are prevalent in the area, it's problematic to blanket it with that characterization because those crimes are committed by a small fraction of the population.

Most people just mind their own business.

Georgina Lee, 52, watched as the first apartments on Pinecrest Drive went up, and then the development of Highfield Park Drive. She moved to the neighbourhood with her infant son because, "It was cheaper rent than any place else."

That's still true---a two-bedroom apartment can be had for under $700, about the same for a room with a shared bath in Clayton Park West.

In her 33 years in Highfield-Pinecrest, Lee has held down a job and raised a child as a single parent. Her son Dean is now a high school teacher and a respected member of the community, an example to other young people growing up in the area. Once, when Lee's coat was stolen from the community centre, all she had to do was spread word that the coat belonged to Dean's mother and it was returned within the hour.

But while she sees all that is good in the neighbourhood, she has also seen the decline. "At one time, this neighbourhood, you could walk the street two, three, four o'clock in the morning and wouldn't think twice about it," she says. "But now you wouldn't. By the time, nine, 10 o'clock comes, you're not outside, because of the things going on in the area."

She knows her neighbourhood is labelled as a slum. "And that's the way it's going to stay."

But not if Sylvia Anthony has her way. Sometimes called "the mayor of Dartmouth North," the 71-year-old is a tireless volunteering machine, emblematic of the passion many have towards the area, where she has spent her entire life.

Anthony is involved in---or president of---just about every community action group in Dartmouth North. She's a member of Crime Stoppers, volunteers with MADD and the Halifax Regional Municipality, she's the facilities manager at the Northbrook Community centre, a liaison with Capital Heath's health and wellness committee, chairperson of Neighbourhood Watch.

She also started a community paper, the North Dartmouth Echo, seven years ago that focuses solely on good news stories from the area. She's providing a bit of positive bi-monthly counter-spin. "I mean you can't expect a community to be perfect. Nobody's perfect, nothing's perfect," says Anthony. "You couldn't find a better place to live in for resources, helping and caring individuals."

The Echo strives to get the word out on all the new programs available in the community and profiles the achievements of individuals. The last issue featured a story on a local couple celebrating their 60th wedding anniversary.

Dorris Buffet-MacDonald, the features writer, shows her copy to the people she profiles before it goes to print to make sure all parties agree with what she's written---high treason at any other media outlet.

Anthony says the Echo also informs residents of the social programs available in the area, because many are often unaware. She says a grade six teacher at John MacNeil Elementary School is using the paper as a teaching tool to not only get kids reading, but to get them pride in their community.

"I believe that the children of today are the adults of tomorrow," says Anthony. "That's why our newspaper spends so much time in our schools."

On a Friday in early spring back in the basement of the Holy Trinity Emmanuel church, dozens of young teenagers have come out for another night of Youth United. In the past they've gone out for bowling, swimming at the Sportsplex and for a night at the movies.

"We have a total enrolment of 48 kids now, which is pretty good seeing how the junior high only has 210 students," says Jenifer Fitzsimmons, creator of Youth United. "If they form that pride in their community then they'll help make it a better place and maybe people will stand up and listen."

"At least we're not out roaming the streets looking for something to do, or out at the mall by ourselves," says Megan Vance, 15, who has come to the Friday night group since it started in September.

The group meetings provide her and her friends a place that shelters them from the crime and danger of the neighbourhood on a Friday night.

"We're all here together, safe."