Orange is the new chip

Things are heating up in our annual March Madness bracket, where we've got your favourite party snacks—pop and chips—battling each other daily in order to discover who is the ultimate satisfier of cravings. There are three match-ups left before the competition is whittled down to the top 16, so now is the time to try and save your faves. If you're slightly confused about the seriousness of this topic, educate yourself on the tournament here.

And feast your eyes on the entire bracket here: 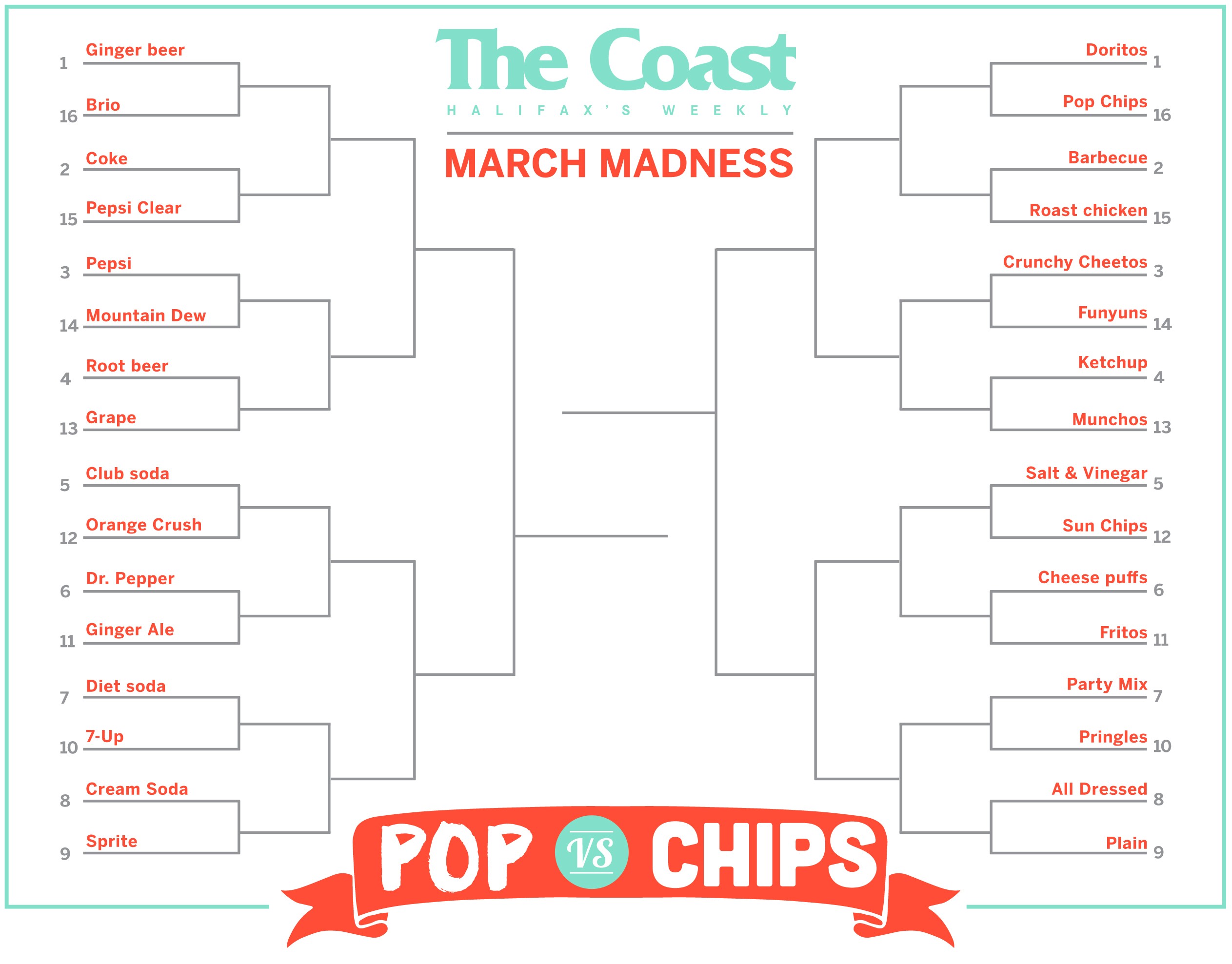 Yesterday revealed tighter than usual races, with moustache-maker and fifth seed, Orange Crush, crushing its polite, conservative opponent Club Soda—its sparkle is gone, it's now just plain old water. How did this happen? A classy and highly drinkable beverage lost to the main ingredient in Swamp Water. This could have been an upset to rule them all, but it wound up totally predictable. Sports, man. So complicated.

The chips showdown was equally as tight, with a 23-18 victory for tastemaker and way-paver of the chip world, ye olde Salt & Vinegar defeating the sad, but probably vitamin D efficient, Sun Chips, whose Wikipedia bio predicted it all.

OK, now for today's fun. These two insane match-ups might just stump you snacksfans. On the drinkable side the sixth-ranked Dr. Pepper (don't even get me started) takes on the grossly under-seeded, 11th place Ginger Ale. I do appreciate the mystery of what the hell that "Pepper" flavour is but IMHO Ginger Ale deserves this. This tried and true athlete has seen it's share of cocktails and cures, and was actually invented by a doctor. And a pharmacist (he invented dry ginger ale). Here's what I recommend you do before casting your vote. Drink two litres of Dr. Pepper, and then see if Ginger Ale can cure the belly ache that'll ensue.

The chips side brings together the unconventional chip shapes of Cheese Puffs (a sixth seed) and Fritos (11th). If these chips were people, they'd be me (cheese puffs for liffffeee) and Stephanie Johns (a true alt chip eater, see Munchos). This is a fucking no brainer. Cheese puffs, Cheetos, Cheezies, whatever you want to call them, should easily trump these feeble, salty but pretty flavourless, corn twists. Yes, Fritos are older and wiser—invented in 1932—and Frito pie is an incredible thing, but how could the possibly compete with that fake cheese flavour. Or the glory of stale cheese puffs? The true twist is that the same dude invented both Fritos and Cheetos, so no matter what a genius wins. Vote with your heart, and your stomach!