Marking the anniversary of the Halifax Women’s March 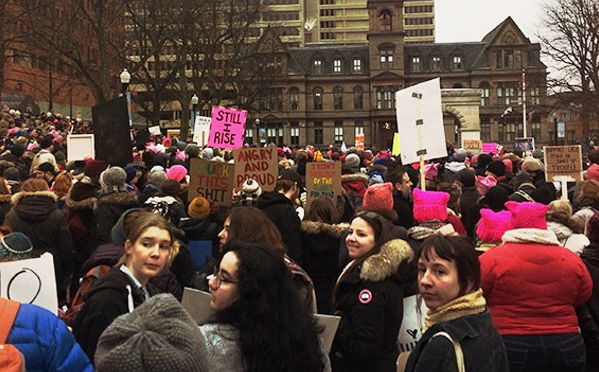 It’s been a year since people gathered in Washington and cities around the world to advocate for issues such as women’s rights, racial equality, LGTBQ+ rights and reproductive justice. The rally was catalyzed by the election of the Trump administration and the hateful rhetoric being spread by many of its supporters.

Jackie Barkhouse was one of the women at the helm of the local branch of the Women’s March on Washington, and she kept the momentum going through follow-up rallies such as Nova Scotia Women Vote and Together For Change.

An anniversary march is taking place on January 20, including speakers such as poet laureate Rebecca Thomas and former firefighter Liane Tessier. After fighting for 12 years, Tessier was finally granted an apology for discrimination she faced on the job (but none of the men responsible were punished, reports CBC).

Last year, says Barkhouse, was just the beginning of the movement. “I think it was obvious that it wasn’t just a reaction to the election of that president, that it was going to be the impetus for change—throughout the world, really.”

Barkhouse references #MeToo as another catalyst for change. The movement was coined by Tarana Burke years ago as a way to spread awareness about sexual abuse. Recently, survivors of sexual assault and harassment have used it as a hashtag and a way to share their stories. It’s made waves in Hollywood, campuses and arts communities.

“The time has come to continue to vigorously pursue the changes that need to happen,” says Barkhouse, “to make the world a more equal and fair place for everyone.”

Jenna Brookfield, a health and safety specialist at CUPE Nova Scotia, is another organizer for the anniversary march. She also acknowledges to the impact of #MeToo, and stresses action needs to be taken in communities outside of Hollywood.

“As people are coming forward in our everyday workplaces, the systems haven’t changed,” says Brookfield. Survivors “are drawing courage from great leaders that they’re seeing leading this charge, but when they try to come forward on a smaller scale within our own workplaces here in Nova Scotia, the system hasn’t changed—the culture hasn’t changed to the extent that we’re believing the women that are coming forward and that we’re actually committing to changing our ways.”

While momentum from the international movement is helpful, people coming forward need to be believed and supported, explains Brookfield. Otherwise, “we’re going to quickly see people falling into old habits and keeping quiet about these things again.”

Believing women when they speak about the challenges, harassment and violence they face is a major theme of this year’s march, notes Barkhouse. Ironically, trans-misogynistic harassment is impacting the Facebook page for the event. Trans exclusionists (those who want transgender woman left out of feminist activism) have hijacked the comments, as they have with women-centric events in the city before.

“I don’t know if it’s shocking when these things happen, but it’s definitely upsetting and beyond disappointing,” says Barkhouse. She directed The Coast to a statement from Melissa Bellefeuille on behalf of the Halifax organizing committee.

The anniversary march is being held on January 20 in Grand Parade Square at 12pm.