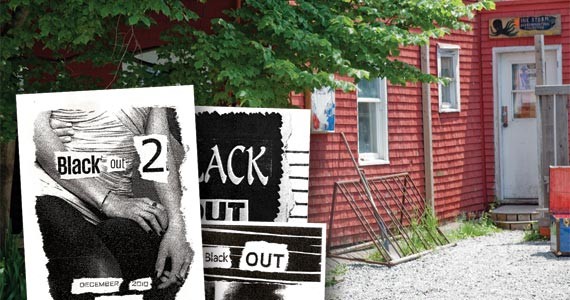 Sometimes when it comes to print media, you need to read between the lines. Mary Green's Black Out zine project guides you in the right direction. Green is a zine-maker, blogger, board president of Fredericton's Gallery Connexion and government employee based in Fredericton who began self-publishing mini-zines called Black Out. The zines feature altered content from free newspapers and provided a balance to what Green saw in what she calls "quote unquote alternative weeklies." From July 4 to July 17, Green will be cutting and pasting at the Roberts Street Social Centre as part of its Shed Residency.

"It's part of an ongoing thing that I've been doing since last fall, I take free papers and kind of rip them up and make collages and redact the text to make some kind of statement about the paper or its content," says Green. "I've done three of them so far, one with Exclaim! and then I did one with Here magazine"---New Brunswick's alt-weekly owned by Irving subsidiary Brunswick News---"and the other I did was with The Aquinian, the St. Thomas University newspaper, which is where I went to university."

While in Halifax, she will turn her sights on the very same paper you hold in your hot little hands, among others. "I was going to do one with The Coast and one with Vice magazine." When it's pointed out that she could make an issue of Black Out using her own words, it's almost too meta to handle. "I'm not sure how I feel about that...I might have to use a different issue."

Holding free alternative media up to the microscope is integral to the project---Green has no interest in dissecting tabloids, as they're much too easy of a target. "The idea of it being local and free is kind of essential to it, I think," Green says. "I like the idea of taking something that exists for free in the community, and making into something that is meaningful to me."

Green took her inspiration for Black Out from Austin Kleon's Newspaper Blackout, a collection of poetry made from The New York Times that was made into a book last year. Like Kleon, Green tries to play off the original article. "I sort of just look through the paper. With the one that I did with Exclaim!, I was kind of cranky with always hearing about the Arcade Fire, frankly," she says. "With Here magazine I was really struck with the December issue---it was more like a catalogue, it didn't have a lot of journalistic content, it was just just gushing about things you could buy at the mall and advertisements."

Sticking to her roots and staying DIY is important to Green, which is why Black Out is not likely to become a slick-looking Tumblr anytime soon. "I don't even use scissors," says Green. "The reason for that is when I started I didn't have a good pair of sharp scissors in my house, so I just ripped it. I've never made more than 50, I don't really have a distribution network, I literally just leave them on the bus for people to find.

"I made my first zine while I was still in high school in 1995. I'd never actually held one before, I read about them in Sassy magazine. It was such a huge thing to me at the time because it had not occurred to me that you could write whatever you wanted and give it to people," says Green. "I've been doing it off and on ever since. I've had blogs on the go, but there's just something about cutting and pasting that is so special, I think."

If nothing else, her dedication to the project shows---she's spending two weeks in a shed sniffing Sharpie fumes. "This is my vacation this year," Green says. "There's worse things I could do with it for sure."