Lawyer sees university effort to smooth things over without engaging Khan as further evidence "they're not treating her respectfully."

October 25, 2017
And then the glare of public attention around the whole Masuma Khan discipline case got to be too much for Dalhousie University.

The school's vice provost, Arig al Shaibah, this afternoon posted an "Important message" formally announcing that the complaint against Khan has been withdrawn. The full message is here, but the bottom line comes down to what al Shaibah calls "three critical reasons."

To paraphrase those reasons: First, given the way the Student Code of Conduct is written, it has a hard time supporting both one person's freedom of speech and another person's ability to take offence to that speech. Second, on further consideration Dal realized a formal Senate discipline hearing probably isn't the best way to deal with an assertive Facebook post. And third, the social media hate that's been unleashed by putting Khan through a process makes a mockery of the university's claims that the process is important to maintain an atmosphere of respect and safety. 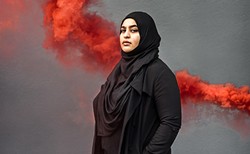 "I’m happy with the outcome and I think my client is also pleased they were able to make what we think was the right call," says Khan's lawyer, Nasha Nijhawan. "But I still really do feel that this decision should have been made by the vice-provost at the stage that she conducted a full investigation into the complaint. We provided her with all of this information and context and explanation that we eventually took to the media. That could have avoided a lot of additional harm to Masuma."

Nijhawan says Dal let her know about the decision by email, just minutes before the public memo went out. "My client and I were not included in any discussions with the university prior to the decision to withdraw the referral. There's been no personal contact with her from the administration, or even me in terms of including her in that conversation or expressing any concern for her wellbeing.

We'll be exploring options on how Masuma can hold the university accountable for the harm that they've caused her. tweet this
"She’s not been invited to participate in the quote-unquote campus dialogue series that's referenced in the memo. And I gotta say, I disagree with the position taken in the memo that the problem here was the process that's available in the code. The code is actually quite clear; it says that free speech will not be infringed by the interpretation of the policy. That's not news to the university. Everything that they rely on now to withdraw the complaint is information they had at the time they referred the complaint. "

While the university would doubtless like nothing more than for this whole episode to disappear, Nijhawan isn't there yet. She may never be.

"We'll be exploring options on how Masuma can hold the university accountable for the harm that they've caused her to date by the approach that they've taken. That matter could have been completely settled if they had talked to us about it, but just as before, they're not treating her respectfully."