Halifax councillor appears to be a fan of the outspoken white nationalist running for mayor in Toronto.

Matt Whitman doesn’t want you to get the wrong impression about his support for Toronto’s most prominent white-nationalist mayoral candidate.

“Retweeting for a friend. Stay calm,” writes Whitman in a retweet from earlier this week of Lindsay Shepherd’s March 22 Macleans story, “Why I invited Faith Goldy to Laurier.”

The Hammonds . councillor has since deleted the post and subsequently put up a screenshot of his own Twitter bio, which reminds the public that “likes and RTs are not necessarily endorsements.”

It's the second time the councillor has tweeted about Goldy, a far-right internet personality and white nationalist running for mayor of Toronto who Whitman endorsed three weeks ago.

After Goldy complained last month that journalists weren’t providing her with enough mainstream media coverage, the bedridden Whitman—still recuperating from a motorcycle accident—sent out a tweet promising to cover her campaign himself. Whitman capped off the tweet with a hashtagged “GoGoldy.”

Politically, the two public figures share traditional conservative thoughts on small government and pro-business policies. But whatever Goldy's campaign platform, it pales in comparison to her past comments on white nationalism.

The divisive Goldy has, over the course of her media career, repeatedly stated that the white race is facing a cultural and ethnic genocide from non-white groups. As Martin Patriquin writes for iPolitics: “She believes the 2016 shooting in a Quebec City mosque was a Muslim conspiracy; and she favourably quoted the work of a Romanian fascist who called for the elimination of the Jewish race.”

She was previously a contributor for right-wing new site Rebel Media, where she published video reports with titles such as, “While migrants rape their way across the continent, where are Europe’s men?”

In 2016, she visited Halifax to investigate the already-discredited Chronicle Herald story about Muslim children choking their classmates with chains at Chebucto Heights Elementary. In a series of video “investigations” for the Rebel, Goldy theorized that the “real” story was being covered up by both the Herald and the Halifax Regional School Board.

While on assignment in Israel last year, Goldy stated that “Bethlehem’s Christian population has been ethnically cleansed,” advocated for launching “a new Crusade” to “reclaim Bethlehem” and said it’s “a fact” that Jewish people are “frankly wealthier and smarter than us.”

She was eventually fired from Rebel Media after reporting from the “Unite the Right” rally in Charlottesville, Virginia without the permission of her boss. During that coverage, Goldy called Richard Spencer’s manifesto to organize the United States along racial divides as “robust” and “well-thought-out.” She also appeared on a neo-Nazi podcast where she recited the “14 words” mantra of white supremacy.


Earlier this year, while protesting outside a conference on white privilege held at Ryerson University, Goldy said that “in-group preference” for one's race is the natural way of the world.

“You see it in birds. You see it in humans,” she told one blogger. “And Europeans, through the Enlightenment and the cancerous thought that came therein, had that bred outside of them, and now they’re being preyed on as a collective...I mean, where is the white supremacy when every single European nation is about to see whites become a minority, basically in the next 40 years?” 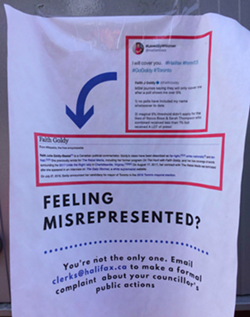 VIA HFX REDDIT
Someone put up fliers on mailboxes around Tantallon and St. Margarets Bay with Whitman's #GoGoldy tweet, a screen cap of Goldy’s Wikipedia and information on how to contact the clerks’ office to file an official complaint.
Goldy’s notion that Canada’s “European way of life” is under attack is remarkably similar to another racial treatise Whitman has previously supported.

Back in February, the councillor came under fire after retweeting a letter from white nationalist group ID Canada that claimed that “European history and peoples are being dismantled.”

The “identitarianism” organization had sent the open letter to city hall in protest of Halifax council’s vote to temporarily remove the statue of Edward Cornwallis.

“The contents of the letter, there was nothing offensive there,” Whitman would later tell reporters, even after he had deleted the tweet and apologized. “It talked about European settlers and what not. How is that offensive?”

ID Canada, like Goldy and other far-right voices, often use “European” and “Euro-Canadian” to warn against the supposed dangers of immigration and propagate white genocide conspiracy theories.

Whitman said at the time that he was unaware of the loaded racial language, but that he still stood by the group's message—just not the people who wrote it.

Pending his recovery time, Whitman will be at Halifax City Hall on Tuesday as council reconvenes from a summer break to discuss the latest update on widespread racial discrimination happening within HRM’s workforce.