Halifax councillor wants the record number of complaints filed with city hall about his behaviour to be debated in public. 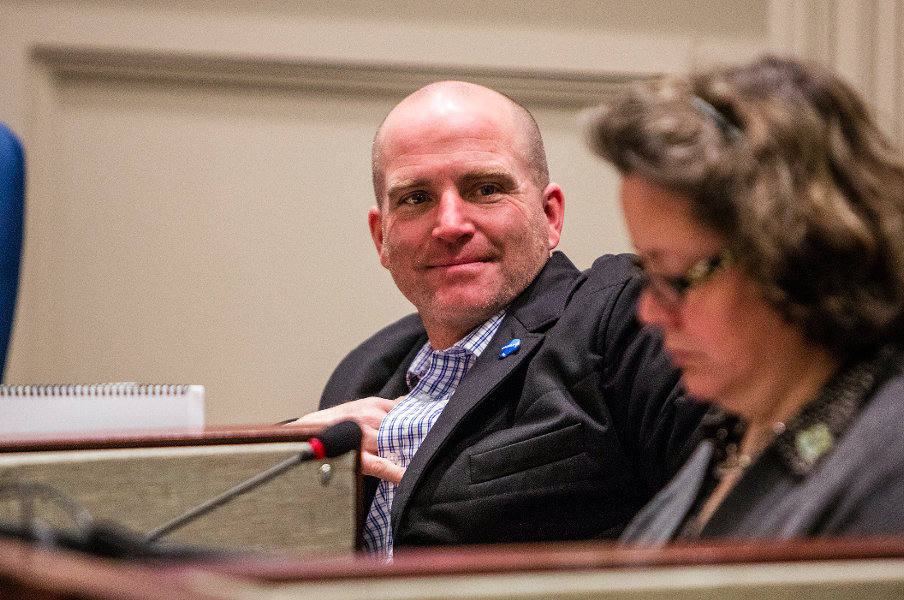 “They just know the guy that criticized an RCMP officer for giving someone a ticket,” says the councillor. “Or the guy that ran around his car with his 19-year-old son after coming from a funeral.”

Or the guy who’s facing an extraordinary amount of public backlash after retweeting white supremacists.

The elected municipal official, to be more accurate, who is still standing by that organization’s message while demanding the public complaints about his behaviour be dealt with out in the open at City Hall.

Reportedly, there are now close to 60 official complaints lodged about HRM councillors so far this year. That’s more than the total number of public complaints filed in all of 2017.

Who those grievances are against can’t be disclosed, but Whitman estimates “probably the majority” of the record-setting number are about him.

The Hammonds . councillor has spent the past two weeks facing sharp criticism after retweeting a message from ID Canada. The white supremacist group had sent an open letter to city hall complaining about council’s decision to temporarily remove the statue of Edward Cornwallis.

“The contents of the letter, there was nothing offensive there,” Whitman told reporters after Tuesday’s council meeting. “It talked about European settlers and what not. How is that offensive?”

The -nationalist ID Canada is one of many far-right “Identitarian” organizations who use loaded phrases such as “Euro-Canadian” when speaking about the dangers of immigration and conspiracy theories regarding white genocide.

In its letter to HRM, for example, the group states that “European history and peoples are being dismantled” because of council's Cornwallis vote.

Whitman says he didn’t know about such “dog whistles” at the time he retweeted the message.

Nevertheless, the councillor says he still stands by the letter’s content. Just not the people who wrote it.

The councillor later clarified he wouldn’t retweet a paedophile, even if he agreed with their message.

“Not if I knew [they were a paedophile], nope.”

Although the retweet was quickly undone, Whitman was immediately called out for his actions by dozens of HRM residents, including deputy mayor Waye Mason.

In turn, Whitman has accused Mason of politicizing the event—obliquely referencing longstanding rumours that both councillors have mayoral ambitions.

The last time multiple complaints came in about councillor behaviour was back in the fall when Whitman got into a different extended Twitter fight with fellow councillor Shawn Cleary over whether it was possible to be racist to Mexicans.

Whitman has demonstrated a predictable pattern in his career of lashing out at colleagues, sarcastically waving off complaints and feigning regret for his actions.

Despite promising two different times during two prior public apologies to “think twice” before tweeting, the easily triggered councillor bristles at even the most routine criticisms.

He’s also lately taken to attacking the media. On Tuesday Whitman complained about CBC reporters calling and recording his voice “without my permission,” then broadcasting “exactly what I said when I answered the phone.”

Whitman also said he’s “disappointed” with Global Halifax, CTV and the Chronicle Herald for their coverage of him. He’s also called out Metro Halifax and The Coast in online posts.

“It gets tiring,” says the about his critics. “Keep the complaints coming. We’ll hear them all. Hopefully, we’ll do them in public.”

Whether that’s possible is up for debate. Standard procedure is for complaints about councillors to be heard behind closed doors. Mayor Mike Savage says that’s important to allow breathing room for an honest discussion.

“I do think this has to be done in a way that allows people to have a free and open conversation,” says Savage. “If there was a way to do it in public that made sense, I’d certainly be open to it. At this point in time, that’s not the way we do it.”

Deputy mayor Mason, however, is on board with Whitman’s idea for a public debate.

The matter will likely be addressed in two weeks at council’s next meeting. Depending on the outcome, Whitman and anyone else subject to a grievance could be ordered to attend counselling, publicly apologize or be withdrawn from their committee appointments.