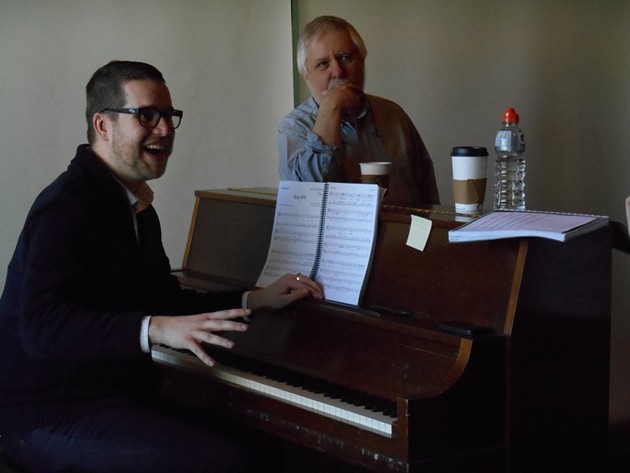 He was “a very, very careful and kind person,” she says. “Intuitive.”

Amyotte had been living with a brain tumour for several years when he died on Saturday. It’s a painful loss for people who knew him as well as the theatre community as a whole.

Hubley met him when she took part in Neptune Theatre’s Youth Performance Company (YPCo), where Amyotte was musical director.

“He was such a good teacher,” she says. “He really got to know his students that he worked with and knew how to teach everyone individually.”

As Hubley got older, she grew from theatre student to teacher. She’s taught alongside Amyotte and, since then, she’s tried to channel him when she is teaching on her own.

Although he was a caring and protective mentor, Hubley emphasizes that his friendship went beyond the classroom. He had a way of making people feel special.

“We just all wanted to be like him and be liked by him. Of course, he loved us all.”

Neptune Theatre released a statement about his passing on Monday.

“He was adored by students and staff alike for his warmth, enthusiasm and consummate performance skills,” it says.

According to the statement, donations in Amyotte’s memory (at his request) can be made to YPCo or the Brain Tumour Foundation of Canada. On Monday, Neptune’s marquee lights will be dimmed as a tribute to him.

The Nova Scotia Secondary School Students' Association released a statement as well, saying Amyotte “embodied the enthusiasm and spirit of leadership with all he accomplished.”

“We’re really unravelling, every day, how much we really did learn from him and how much we’re still applying it now,” says Hubley. “Whether it’s in teaching or being a human person or being an artist.”