"Unembedded in Afghanistan" his second CAJ award in two years 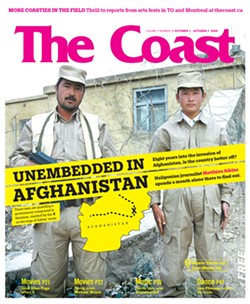 Congratulations to Matthieu Aikins. On Saturday, his Coast cover story "Unembedded in Afghanistan" took the prize as the country's best Print Feature at the Canadian Association of Journalists annual awards. The CAJ calls the awards "Canada’s only recognition for the best in investigative journalism across the country" ("Unembedded" was up against stories from both the Hamilton Spectator and the Globe and Mail).Matthieu's on an impressive streak, as his feature "Adam's fall" won a CAJ award last year. The investigative journalism workshop at King's College---which produced our "Boat Harbour: On toxic pond" feature---and news editor Tim Bousquet were also in the running for CAJ awards. Although they didn't win Saturday, Bousquet's nominated story "Why everyone loses under the city's new property tax plan" is valuable background to the latest city council report card, which comes out tomorrow. Given that this is the week The Coast turns 17, the CAJ news was about the best birthday present we could ask for. Even better than yesterday's concert announcement that brings those 1993 glory days lurching back like a reanimated corpse.