Peace activists pushed him to make good on pledge to join anti-nuclear organization. 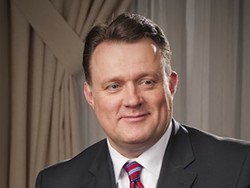 Halifax mayor Mike Savage will give peace a chance. Soon after he was elected, Savage told The Coast that he was “open to” joining Mayors For Peace, the international movement that has mayors symbolically declare their cities nuclear-free zones. Now, says Savage, he’s ready to fulfill that pledge.

Mayors For Peace was started in 1982 by Takeshi Araki, then the mayor of Hiroshima, Japan, the first city to have a nuclear bomb dropped on it. The movement now joins nearly 6,000 cities around the world, including 91 Canadian cities, and holds official status at the United Nations.

Savage’s predecessor, Peter Kelly, refused to join Mayors For Peace, because he saw it as criticism of the large military presence in Halifax, even though Canada’s navy has no nuclear weapons. While joining Mayors For Peace will have no force of law, it will be a symbolic voice against the presence of nuclear-armed US warships that visit Halifax Harbour.

After telling The Coast he was exploring joining Mayors For Peace, Savage took no action to actually do so. He seems to have been prompted by a rally head at Grand Parade last month to see off local peace activist Tamara Lorincz, who has been awarded the Rotary international's World Peace Fellowship, a one-year course of study at the University of Bradford in England.

Lorincz was the most vocal critic of the multi-billion dollar shipbuilding contract awarded to Halifax Shipyard, saying that preparation for war is an inducement for war. Savage, however, has celebrated that contract. But at the rally, peace activists pushed Savage to make good on his pledge to join Mayors For Peace, and now he says he will.

Savage has yet to say if he will simply join the organization on his own authority, or if he will bring the issue to city council.