The young adult fantasy novel is more Chilling Adventures of Sabrina than it is Harry Potter. 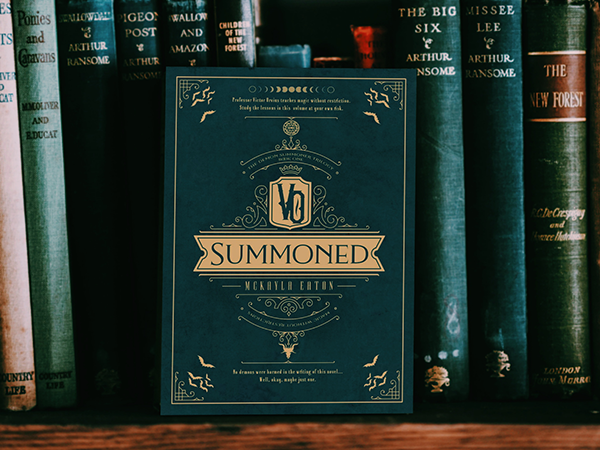 You may have glimpsed Mckayla Eaton hunched over her laptop at Uncommon Grounds or Trident Booksellers & Cafe. But while you were focused on your daily caffeine fix, Eaton was thinking (and writing) about something a bit more magical than a caramel macchiato.

Eaton's debut novel, Summoned, is the first book in a young-adult fantasy trilogy—and it's populated by familiar tropes: hell demons, forbidden spells, student magicians, a mysterious professor and, of course, a boy wizard.

"YA wasn't my intended genre, actually, and to be honest I haven't read a lot of it," admits Eaton of the book, which was released September 3 from The Parliament House publishing.

"But I ended up going with YA for Summoned because I wanted to play with the stereotypical boy-wizard trope."

Alton, Eaton's boy wizard, is a normal Canadian teenager—except instead of math, he's learning magic. He wears sweatpants around the house and neglects his mother's texts. To be clear, he's no Harry Potter.

"The main difference between Summoned and similar novels is the character of Alton," explains Eaton. "There's nothing special about him. He isn't the chosen one. He has no superpowers, no secret royal lineage, no magic sword or stone; and he has no stakes—not at first."

What he does have is a fraught, will-they-or-won't-they relationship with a fellow student, a witch named Reagan who listens to Metallica and doesn't like wearing pants.

Alton and Reagan are less like Hogwarts kids and more like students at the Academy of the Unseen Arts in the Chilling Adventures of Sabrina—they're damaged, quarrelsome teenagers with supernatural powers. They swear, trade insults and hurl dangerous spells at each other.

"They end up working together so well in the end because they learn how to hurt each other before they learn to love each other," explains Eaton.

"Love, there, is a loaded term. Not to give too much away, but their relationship isn't exactly a Cinderella story. At least, not by the end of book one."

Stay tuned for all the trilogy has in store by checking out mckaylaeaton.com