Margaret MacLennan is a prominent face in the rebellious world of American conservatism—and she lives in the north end. 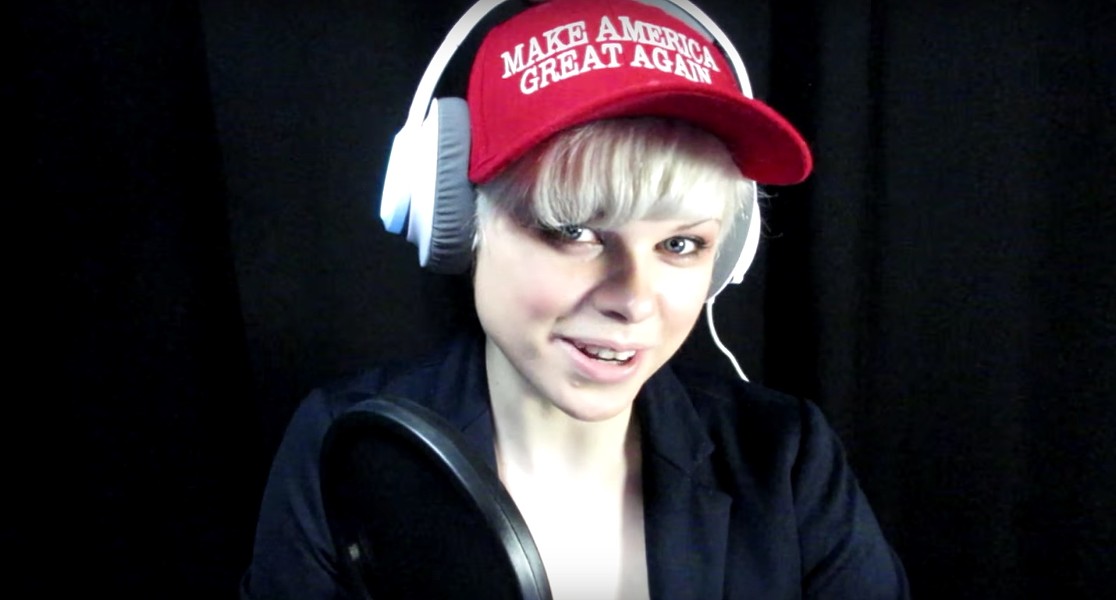 Canadians can't buy American election merchandise. Technically, that'd count as a foreign donation to a presidential campaign. That hasn't stopped Margaret MacLennan from collecting three Make America Great Again hats sent to her by one of her fans—well, four if you count the unofficial one she had made at the mall.

“They were like, 'What the hell is this for?'” says MacLennan about the staff at Lids. “I'm like, 'I'm just going to walk away.'”

The 29-year-old grew up in Clayton Park and now lives in Halifax's NDP-friendly north end. She studied philosophy at St. Francis Xavier, reps geek culture (she's a former Hal-Con volunteer) and is a local bellydancer. She's also a disability advocate, having had her colon removed three years ago after spending several months in the hospital battling ulcerative colitis. Most of her family, her friends, her neighbours are liberal. She's not.

“I'm used to a lot of my liberal friends being like, 'Why are you conservative?'” she says over brunch at Studio East. “It's not at all like the thing you see in wider media where the conservatives are all a bunch of evil, obese, older men chomping on cigars...I think that sort of spoofed notion never really left a lot of my friends' heads.”

MacLennan doesn't fit the image of a stereotypical young conservative, but then, that's why it's a stereotype. Even in an inclusive big tent of those with conservative values in Canada, she remains an outlier. True, she's no Ezra Levant or Ann Coulter (but she's a big fan of both). She has written for Breitbart's news network, though, and managed Milo Yiannopoulos' white-men-only Privilege Grant. She's produced videos from her Halifax home attacking the research flaws in Anita Sarkeesian's thesis about video game sexism, whispered Trump tweets for ASMR videos and updated the lyrics of the “Battle Hymn of the Republic” to reflect an oncoming social justice war.

Despite what you might think, and what people keep telling her, she says she's not a part of the alt-right. Applied at its most narrow, that term refers to the libertarian-leaning, anti-neocon message board users of sites like Taki Mag. A “weird cross between anger and more anger” that's only nominally conservative, says MacLennan. Alt-right or wrong, she's a rebellious figure amongst a growing chorus of online voices shattering what it means to be conservative.

Is it really that surprising she's such a fan of Donald Trump?

He's someone MacLennan believes will help our neighbour to the south “do anything it can to get American-first business into high gear.” Most importantly, though, Trump isn't Hillary Clinton—the embodiment for many American voters (it would seem) of the status quo.

”It's four more years of a family that's already been in charge,” MacLennan says of a now-evaporated Clinton presidency. “It's a great way to rot out a system, by putting the same people in charge.”

Growing up in Chrétien's Canada, MacLennan wasn't always conservative. She was opposed to Stephen Harper, at first, largely she says because CBC's coverage made it seem like the sky was going to fall if he became prime minister. When it didn't, she began seeking out alternative media sources from the right.

About a year-and-a-half ago she first contacted Milo Yiannopoulos looking for writing opportunities with the Breitbart editor's burgeoning media empire. Yiannopoulos was the alt-right's bleeding-edge commander this past election, someone who GQ magazine called the “goblin prince” of basement-dwelling internet trolls.

Together, the two worked on a number of projects. MacLennan says she contributed a chapter on Sarkeesian's website Feminist Frequency to a Gamergate book for Yiannopoulos, and also ghost-wrote some of his tweets and Breitbart articles. Her biggest endeavour was undoubtedly the Yiannopoulos Privilege Grant. Announced this past January to outrage from the liberal media—thanks in part to some intentionally provocative copy written by MacLennan—the grant was a crowdfunded scholarship exclusively for white male applicants who can't access other diversity-focused bursaries.

“It was kind of a joke, but it was also a very serious project,” she says. “If you're just a guy; if there's nothing wrong with you; if your grades are OK; if you're not taking all these different other things in school, there's just nothing for you and you can feel very trapped and alone.”

MacLennan says the grant program received a couple hundred thousand dollars in donations, but what happened to all that money isn't clear. Donations were seemingly routed directly into Yiannopoulos' bank accounts (as tweeted by MacLennan), and so far no grants have been paid out. There's still not even a section on the website for anyone to apply.

Sensing problems and not getting paid, MacLennan began to distance herself from the project this past spring. She says she's wasn't the only one who's had problems with Yiannopoulos' accounting, but she was the only person who went on record about the grant's failures—being quoted in the Guardian, the Daily Beast and GQ.

“None of the conservative websites would cover it either,” says MacLennan. “I just want to be seen as somebody who, when I see possible mishandling of funds, I'm willing to go to the media...because I think it's wrong.”

In an audio statement posted to YouTube in August, Yiannopoulos denied the insinuations of misusing donations and blamed a busy schedule for not getting the grant's paperwork in order yet. He didn't get back to The Coast to confirm or deny any of MacLennan's other comments.

MacLennan and Yiannopoulos aren't talking anymore. She no longer has access to the grant, and also doesn't know if or when that Gamergate book is coming out.

There was backlash for going against the party, as it were. But MacLennan says that's nothing new for her. Neo-Nazis have called her a “Jew-loving Israel this, that and the other thing.” Jewish commenters have called her a “Nazi Hitler sympathizer.” She's always worried about her mom reading the comments on her YouTube channel. There have “really unpleasant” emails, even some death threats. She follows Taylor Swift's advice and tries to shake it off. That's the double-edged sword of being a free speech advocate.

Freedom of speech brings us back to Trump, and the one concern MacLennan has with America's new commander-in-chief: His crackdown on journalists.

Despite the interest in American politics, MacLennan remains a dedicated Canadian and is most proud of her hometown. She hasn't been following much of the conservative movement here north of the border, though she does support Maxime Bernier's run for Tory leadership. Provincially, she's even less concerned.

When it comes to Halifax, she's a pretty big fan of how all the new construction is mixing with old buildings, and where HRM's council is leading this city. “Good for you, mayor Savage. That's really fantastic.”

That's the same mayor who, Wednesday in Metro, said he's “worried for the world” and disappointed in Trump's win.

Now that the dust has settled on an election largely defined by polarizing arguments, hate-spewed rhetoric and the ratcheting-up of tensions by both sides, the uncomfortable hangover everyone's waking up to is that we all still have to live with each other. Last week someone supporting Trump may have seemed eccentric, evil, impossible. This week, she's your neighbour. She always was.

“That's one of the good things about Canadian politics,” says MacLennan. “You can have a friend who's completely on the other side of the Canadian spectrum, but they probably have really similar views to you. And they're probably also related to you, or at least they know a friend of a friend of yours, so you can't back-talk anyone.”