The lime green grilled cheese mobile serves up a newsworthy menu of melty sandwiches that we’d eat daily, if given the choice. 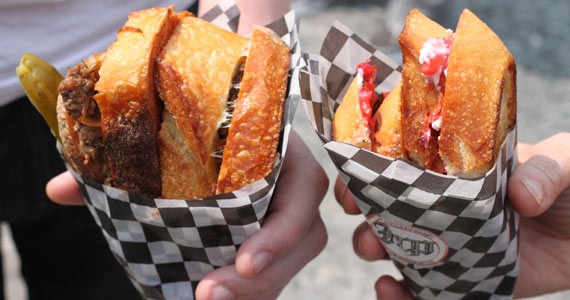 You can't miss Halifax Press. In the midst of all the gravel and brick that makes up the Historic Farmers' Market, the truck stands out big and bright, a lime green beacon that leads to cheese.

The shade from a yellow-and-white awning that stretches out over the window crawls towards a scattering of lime green lawn chairs arced out in the lot. A couple of kids crawl over them while families wait for their sandwich orders. There's quite a little crowd around the truck.

The name of the truck is a newspaper pun, and that extends to the menu. The main part is called the Headlines, while the DIY menu, the Editorials, is where you write your own flavour story. There's cheddar, havarti, goat cheese, feta, gouda and smoked gouda---all the cheese that's fit to eat---along with grill-friendly ingredients like spinach, tomatoes, eggs, ham and bacon.

I order the Strawberry Fields ($6), which is self-explanatory, and the Smoke on the Harbour ($7), a meatloaf sandwich, both on Julien's sturdy, crusty sourdough bread.

While I'm waiting, a couple of friends wander up, one with a plate from the nearby Food Wolf, and the other with a baguette from the market. They end up ordering the French toast crunch ($7).

The first two sandwiches are wrapped into very portable cones---it's a great way to serve up sandwiches as street eats. My friends and I take turns holding the cones and snacking on the crisp sandwiches. Both are great. When it comes to the Smoke on the Harbour sandwich, the smoke of That Dutchman's gouda is mild enough that it doesn't overpower the flavour of the gouda, a delicate, nutty and quite milky cheese. The smokiness does add a thickness to the flavour of the meatloaf sandwich, though, curling its way around the hints of spice in the chorizo and the sweet notes of luscious caramelized onion. It's a sandwich stuffed with flavour, and it makes for a pretty substantial meal. The tart pickle on the side is appreciated, too, since there is a heaviness and oiliness to this sandwich that really cries out for the sharp, zesty wallop of acidity.

Goat cheese makes for a creamy, tart foil to sweet strawberries in the other sandwich. Ribbons of fresh basil have been added to the strawberry relish, adding just the slightest hint of bright peppery freshness to the simple filling. It's a delightful sandwich, and a nice counterpoint to the heavier savoury options on the menu.

The French toast sandwich is handed through the window just as we're finishing up the other two sandwiches. It's very different from the other two: instead of grilled bread, an egg, havarti from Fox Hill and smoked ham are tucked between two slices of French toast and melted. This sandwich is served on a paper tray with a dipping cup of maple syrup on the side. It's essentially the best possible rendition of the McGriddle concept. That concept is, of course, putting egg, meat and cheese between breadstuffs that might as well be cake and then finishing it off with a dash of syrup. It is a concept I wholeheartedly approve of. I would like to eat one of these Halifax Press sandwiches every day until I die from eating one every day. In short: it's very good.

Grilled cheese sandwiches aren't exactly the ideal summer food, but these will likely prove very hard to resist in the future. I look forward to seeing this truck humming around as seasons change. I'm especially hopeful that they'll be serving up grilled cheese sandwiches, soup and hot chocolate in colder months near the market, The Oval or another busy outdoor location.

Basically, I look forward to seeing what's hot off the presses all year round.