Memories of north end treasure The No Name Cafe

After 24 years of perfection, Gottingen Street cafeteria The Cafe is closing on Friday 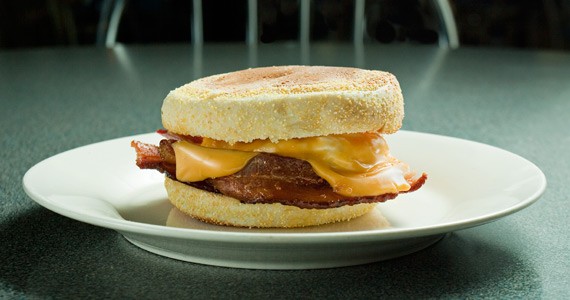 The No Name is inextricably linked to my Coast life. When the office moved from downtown to the north end—first across from the Marquee, then to its current location on Cunard—there was a staff-wide bemoaning of lunch options. The neighbourhood was not trendy then; there was Bob & Lori’s on Gottingen, and that was about it. Production manager Amy Campbell was the first to mention the The Cafe, and the one who dubbed it The No Name Cafe. Art director Kate O’Connor, who loves doling out nicknames, is the one who christened George “Uncle Jesse,” because he was Greek and looked like John Stamos. I would get my coffee there in the morning—shoutout to Van Houtte—and even though my travel mug was giant, Uncle Jesse only charged me a dollar. It’s always been crazy cheap, in fact, even since the neighbourhood exploded and lunch became $15. Every year Darlene would do a Christmas dinner option for the last few days before the building shut down. The clientele was probably the most diverse in the area. Uncle Jesse remembered all your ordering quirks, a rare thing in this town, and if you were short he let you sort it the next day. It was simple and hearty and full of value. It didn’t take 40 minutes or cost more than $10. It’s not a place everyone knew, but if you did, you loved it.

It’s a very accepting group at the No Name. Everyone was treated with the same polite, efficient respect. The only thing that rivals this consistency is the taste, quality and reliability of the food, as you could set your watch to shepherd’s pie Tuesdays. Once, in my early 20s, I was going through what I’m sure was a highly annoying phase of trying to avoid garbage. So, when I went to take out places, I had to have my own container and utensils, and to their credit, the only place that would take my beat up Tupperware without even a second glance was the No Name. God bless their little cottons.

Nowadays—less so when I started to work in the neighbourhood—there are a lot of places to get some kind of a meal/baked good/coffee on Gottingen Street, but harder to find is a place that will give regular customers credit without hesitation. The No Name was generous and sympathetic to folks who were a few dollars short, or flat out forgot their wallets (hi and sorry).

The No Name was cozy—circular tables provided a comforting sense of privacy, and the chairs are unfancy but comfortable, a total neighbourhood rarity. Dear every restaurant and bar owner: An unfinished slab of wood isn’t that awesome to sit on. Other than a delightful wall mural, the decor is minimal—the simple and unchanging white board listing the sandwich selection and a small chalkboard listing the day’s soups is functional and easy to understand. Mostly, it’s a great backdrop for emotional conversations. I’ve cried many times in the No Name and have never once felt weird about it.

If you want to know how to do a breakfast sandwich right, just take a tip from the pages of the No Name cookbook. On its face, it sounds middling: Toasted, buttered bagel, microwaved egg and bacon, processed cheese. However, it’s a real sum-of-its-parts scenario. You won’t get a dry, lukewarm product here. It’s greasy, it’s filling, it’s piping hot, and it will beat the hangover or morning sickness right out of you, trust me.

—Stephanie Johns’ favourite meal is the breakfast sandwich (on a sesame bagel, with bacon), backup is the shepherd’s pie and let’s be honest—a giant pile of those potatoes.

Comfort is probably the best word to sum up The Cafe. It was a place that didn’t care if it was Cool or if its dishes were photogenic, it used a microwave and styrofoam with no remorse and never judged if you ordered a side of potatoes with your already potato-y shepherd’s pie.

You could remain guilt-free while treating yourself to a lunch combo, coffee, dessert and maybe chips the day before payday because you knew it wouldn’t, couldn’t cost more than $7. And it was always cool to sit around (bitching, moaning, loitering)  long after you’d finished eating because no one gave a shit who you were or what you were doing. The Cafe made sure its own were always comfortable too, keeping one VIP table Reserved in perpetuity for staff meals and breaks.

George always sort of smirked saucily when he asked, like clockwork, “Would you like a dinner roll with that?” because he knew that, of course you wanted that Saran Wrapped white roll and little cup of butter —even if you were just saving it for a 3pm snack.

And you were totally OK with that.

—Allison Saunders would kill for some shepherd’s pie right now