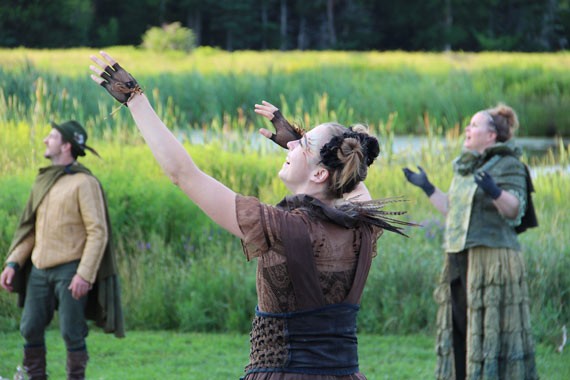 Hosting the Merritt Awards is a familiar gig for local actor Marty Burt, but that doesn't mean it's a cakewalk.

Burt, who returns to the podium for the fifth time for this celebration of the best in Nova Scotian theatre, says he walks a fine line. "When you're roasting people who are your peers and your friends, you want to gently poke fun but not be too mean.

Naturally, an awards show put on by and for the theatre community isn't an evening of dull speeches and endless thank-yous—it's a theatrical experience in itself.

Burt promises a Billy Crystal-esque opening number that incorporates references to many of the nominated outstanding productions (Hardboiled-A Sal Dali Crime Tale, Outside Mullingar, Pop-Up Love Party, The 39 Steps, The Tempest and The Turn of a Screw) in a musical medley.

"In the past I've written medleys that draw on pieces from musical theatre," says Burt. "But this time around, I'm using some popular songs that have been huge hits in the past year."

Other ceremony highlights include an original song written by Burt in collaboration with musician Andrew Coll and a recurring comedy bit called "The most fucked-up award" presented by Neptune Theatre's assistant technical director Garrett Barker.

And while the evening promises to be filled with laughter, Burt says the challenges that have beset the theatre community because of the loss of the Nova Scotian film tax credit will also be acknowledged. "It's not going to be a dark downer or anything, but we wanted to recognize that we're hurting and that togetherness helps," he says.

Nancy Morgan, executive director at Theatre Nova Scotia, says that the annual celebration shines a spotlight on the amount of activity that happens in the theatre community in any given year.

"People often don't realize the number of shows that happen in this province. The jury had 55 shows on their list of what to see," she says. "That's a lot of plays and a lot of talent."

Morgan agrees that the Merritts are both a time of celebration and reflection. She says that while many of TNS's members are hurting because of the film tax credit loss, and some are leaving or have left the province, the Merritt Awards speak to the resilience and tenacity of this province's theatre artists.

"Being in a room filled with talent and looking around and seeing so many young faces," she says, "makes me know good things are going to continue to happen here."

Twenty-three different theatre companies have been recognized with nominations, and two in particular scooped up a bundle: Two Planks and a Passion earned 13 Merritt Award nominations for its 2015 summer season and LoHiFi's recent production of Hardboiled-A Sal Dali Crime Tale was nominated for nine. Host Burt is also in the running with a nomination for Best Leading Actor in The Tempest and Best Supporting Actor in Great Expectations.

This year marks the 15th anniversary of the Merritts, and upwards of 300 people are expected to enjoy the show on Monday, March 21 at Casino Nova Scotia's Schooner Room.

"The first time I hosted the awards, I remember feeling kind of terrified when I saw how many people were in the audience." says Burt. "But I'm older now. I'm middle-aged and that means I'm less scared. If I bomb, I bomb.